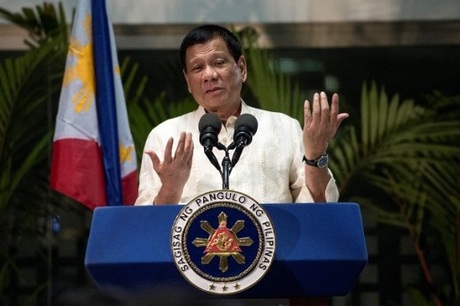 The Philippines' Supreme Court on Tuesday endorsed President Rodrigo Duterte's enforcement of martial law across the southern third of the country, which he said was necessary to defeat Islamic State group-backed militants.

Duterte imposed military rule across the insurgency-wracked region of Mindanao on May 23, hours after hundreds of gunmen waving black IS flags occupied parts of Marawi city and triggered deadly clashes that are yet to end.

Opposition lawmakers questioned why a region of 20 million people had to go under military rule when fighters just struck Marawi, urging the Supreme Court to strike it down for its "utter lack of sufficient factual basis."

An overwhelming majority of the justices dismissed that petition, Supreme Court spokesman Theodore Te told reporters, but he did not give reasons for their decision.

Duterte stressed Tuesday he had made the right decision, saying "martial law should have been declared a long time ago" when militants began bombings, kidnappings and beheadings across Mindanao.

"For as long as there is one terrorist there in Marawi, this (threat) will not stop," he told reporters, warning of a potential "spillover" to other areas.

Militants continue to occupy parts of Marawi, the Islamic heartland of the mainly Catholic country, despite a U.S.-backed military offensive there that has claimed more than 460 lives and displaced nearly 400,000 people.

Duterte said when he declared martial law the militants had attacked Marawi as part of a plan to establish a province for IS in the southern Philippines, which has endured decades of deadly conflict involving communist and Muslim separatist rebels.

In their court petition, opposition lawmakers warned martial law would open the door to repression and atrocities seen during the 20-year rule of the late dictator Ferdinand Marcos that ended with a "People Power" revolution in 1986.

During the Marcos dictatorship, thousands of suspected communist and Muslim insurgents, as well as his critics, were jailed, tortured or killed, according to historians.

When Duterte announced martial law, he praised Marcos's version while vowing his own would be "harsh."

Duterte also warned martial law could be extended beyond 60 days and expanded across the country if he felt it necessary.

"I urge you to remain steadfast and alert as martial law in Mindanao will remain in effect to counter the persistent threat of terrorism and insurgency," he told troops.

As part of his martial law measures, Duterte allowed security forces to detain suspects for up to three days without prior court orders.

The government has detained 66 people using these powers for their links to the Marawi conflict, including the parents of brothers who are key militant leaders.

Duterte had repeatedly threatened to ignore the findings of the court if it ruled against him, vowing only to listen to the recommendations of the military.

"They are not soldiers. They do not know what is happening on the ground," Duterte said of the Supreme Court justices, as he also threatened to put martial law critics in jail.

Renato Reyes, leader of the leftist Bayan party, issued a warning about the court ruling.

"We feel that the court has now made it easier to declare martial law nationwide, it has provided the legal basis for extending martial law beyond 60 days," Reyes added.

Under the constitution drawn up to prevent a repeat of Marcos-era abuses, the president is allowed to declare martial law only to prevent "invasion or rebellion."

It is limited initially to 60 days, and Duterte must get congressional approval to extend it.

Philippine military chief General Eduardo Ano welcomed the court ruling while warning in a statement that "the mission is not yet done."

"The (military) takes this as a vote of confidence that we are doing what is right and what is necessary for the restoration of the rule of law, peace and order in the whole island," he added.

Maria Christina Yambot, counsel for one of the lawmakers who petitioned the court, told AFP they would file an appeal asking the tribunal to overturn its ruling, which she described as a "dangerous precedent."