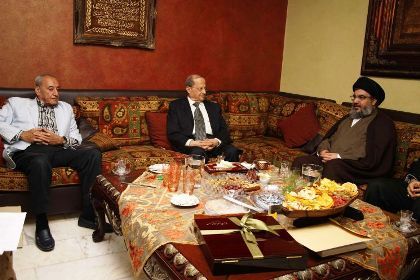 A meeting was held lately between Ministers Ali Hassan Khalil and Jebran Bassil, and the aide of the Hizbullah chief, Hussein Khalil, to set the stage for talks between leaders of the March 8 coalition, media reports said Wednesday.

An Nahar newspaper said the meeting was aimed at containing the rift between them after the Hizbullah ministers voted at a cabinet session last week in favor of a proposal made by Premier Najib Miqati rather than supporting a decree on the increase in wages suggested by Minister Charbel Nahhas, who is their ally.

Ali Hassan Khalil is loyal to Speaker Nabih Berri while Bassil and Nahhas represent the Free Patriotic Movement in the government.

Bassil told As Safir daily that “the meeting launched a new path of coordination and cooperation,” saying the FPM’s allies, Hizbullah and Berri’s Amal movement, have agreed on the basic demands of the FPM.

Al-Liwaa said, however, that both the head of the Lebanese Democratic Party, Talal Arslan, and the Tashnag party are seeking to join the meeting to discuss among other things the name of the March 8 candidate to head the Higher Judicial Council, attempts to remove the obstacles facing the approval of water and electricity projects proposed by the FPM and the coordination of their stance on the draft state budget.

While informed sources refused to unveil the date of the meeting between the March 8 leaders, sources close to the FPM told the newspaper that the recent differences among the allies came over what issues to prioritize at cabinet sessions.

The FPM has set certain priorities, among them are the appointment of the HJC president and the approval of development projects in the water and electricity sectors.

a rift? already? they boasted that it was a united government... all hypocrits