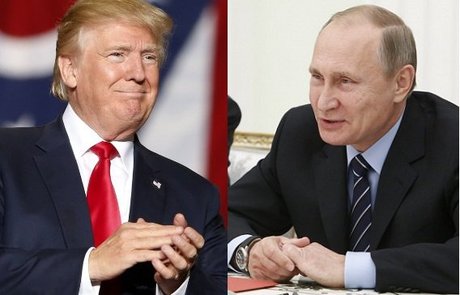 US President Donald Trump and Russian leader Vladimir Putin were to meet Friday for the first time in a highly-awaited encounter at a G20 summit marked by divisive issues, a rift between America and its Western allies and violent protests.

New clashes erupted outside the fortified venue where leaders of the world's biggest economies were gathering, after a demonstration late Thursday degenerated into violence, leaving scores of police injured.

The blockbuster bilateral between the brash property tycoon and the ice-cool ex-KGB agent promises to be dissected frame by frame for any sign of rapprochement or estrangement.

Their meeting, say analysts, is freighted with importance for issues ranging from the North Korean crisis and conflicts in Syria and Ukraine to US-Russian disarmament treaties and world trade.

"While Trump's pro-wrestling approach is showy, bombastic and impulsive, Putin thrives on judo's discipline and mental toughness, where a core technique is to keep an opponent off-balance and exploit his weakness," noted Derek Chollet from think-tank German Marshall Fund.

"How these contrasting styles of machismo interact... will likely be the defining feature of their relationship."

Their meeting comes on the sidelines of what is expected to be the most fraught G20 summit in years.

Trump's "America First" approach on trade and climate-sceptic stance are testing the relationship with longstanding allies, especially in Europe.

And his tough response to North Korea's missile programme -- an issue where Russia and China are urging calm -- throws a further volatile ingredient into the mix.

Outside the heavily-guarded conference hall, police clashed with demonstrators early Friday, fulfilling long-standing predictions of violent confrontations in a city that is a stronghold of radicalism.

Protestors set fire to patrol cars in the district of Altona, vehicles were torched in other areas and some designated corridors -- road lanes set aside for delegations -- were blocked, federal and local police said.

- End 'destabilising' action -On the presidential election campaign trail last year, Trump said he hoped relations with Putin could be reforged after Russia's acrimonious ties with his predecessor Barack Obama.

But Moscow faces mounting accusations that it interfered in the election to help propel Trump into the White House. As a result, Trump faces pressure at home and from US allies to take a combative tone.

In a key speech in Warsaw on Thursday, Trump fired a rare salvo of criticism at Russia, but did not name Putin specifically.

"We urge Russia to cease its destabilising activities in Ukraine and elsewhere, and its support for hostile regimes -- including Syria and Iran -- and to instead join the community of responsible nations in our fight against common enemies and in defence of civilisation itself," he told a cheering crowd of 10,000.

He admitted that Moscow "may have" tried to influence the 2016 election that brought him to power, but also suggested others too may have been involved and blamed predecessor Obama for failing to act.

- 'Pros in the room'? -A White House source confirmed to AFP that Trump will only be joined at the meeting by Secretary of State Rex Tillerson and a translator, an extraordinarily small cast list that raised concerns among experts.

"Neither Tillerson or Trump have any experience of foreign policy. That is one reason why they need pros in the room when meeting Putin," said Thomas Wright of the Brookings Institution, who added that Trump was now more likely to appease Putin.

Former US ambassador to Russia Michael McFaul expressed concern that Trump's National Security advisor H.R. McMaster and his team -- seen as moderating influences in the White House -- were being sidelined.

"Putin likes small meetings. This means WH is letting Kremlin dictate the terms of this meeting. HR, at a minimum, should also be there," he wrote on Twitter.

Ahead of the talks, the US also extended a hand of cooperation to Russia, voicing a willingness to work together on establishing "no-fly zones" in Syria as part of a joint effort to stabilize the war-ravaged country.

In his first public remarks since the test, Trump said in Warsaw that Pyongyang's military sabre-rattling would bear "consequences" and warned he was considering a "severe" response to its "very, very bad behavior".

After repeatedly urging Beijing to ratchet up the economic pressure on North Korea, Trump will hold what promises to be a testy meeting with Chinese President Xi Jinping on the G20's sidelines.

At a dinner meeting grouping northeast Asian leaders but which Xi did not attend, Trump was asked if he had given up on the Chinese leader.

He replied: "Never give up."