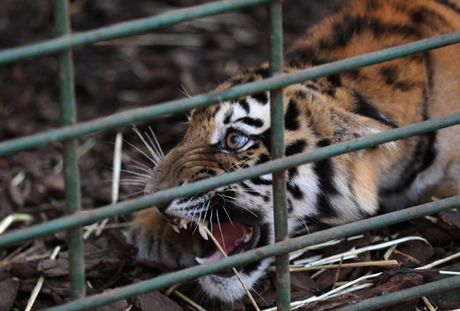 Three Siberian tigers rescued in Lebanon from an attempt to smuggle them into war-ravaged Syria were being resettled to France on Tuesday, an animal rights group said.

The tigers were put in the care of Animals Lebanon in March after being found dehydrated and stuffed into a single wooden crate at Beirut's international airport.

They had arrived from Ukraine and were supposed to have been transported to a zoo in neighboring Syria, but a Lebanese judge put them in the care of the non-governmental organisation.

The group then waged a four-month legal battle that culminated in a Lebanese government decision on June 7 to allow the tigers to be resettled in France.

On Monday evening, Animals Lebanon staff drugged the animals and loaded each one into boxes decorated with tiger stripes and their names: May, Antoun, and Tanya.

They were then flown out as special cargo on a passenger plane and were expected to arrive at the Tonga Terre D'accueil sanctuary near Lyon by Tuesday night, said Animals Lebanon executive director Jason Mier.

"I could sleep after the plane got off the ground -- that's the end of it. Now, they can finally enjoy their lives," Mier told AFP.

Images published by the group in March showed the weak cubs, covered in maggots and faeces, squirming in a tiny crate when they were found at the airport.

Lebanon's agriculture ministry issued a decree in July 2016 to stop the trafficking of big cats and force zoos to register them formally.

It has also been a member since 2013 of the Convention on International Trade in Endangered Species (CITES), which regulates the trade of exotic animals.

While the cubs were transported with an export permit listing their destination as a zoo outside Damascus, the conditions in which they were travelling violated international rules.

"This was the most clear-cut case of straightforward trafficking but the most difficult to do anything about," said Mier.

He said the exporter and the alleged owner of the cubs regularly harassed NGO employees at Lebanese government offices.

"We've never received so many threats in a case like this. We had a police escort to the airport last night with the tigers," he told AFP.

"They're worth a lot of money and that's what this is all about."

The trade of big cats is big business in Lebanon, where the animals are often locked in cramped cages, forced to perform in circuses, and paraded by wealthy individuals as status symbols.

Mier said his group could use this case as an example to expand training at airport customs to identify potentially trafficked animals and to advocate for parliament to pass a more robust animal protection law.

"It's very nice taking care of animals, but when I receive them I know it's temporary. In the long-term, they should go to a place that's better for them," he said.