Ban Urges U.N. Action on Syria 'in the Name of Humanity' 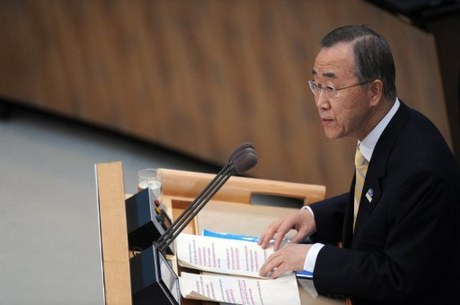 U.N. leader Ban Ki-moon said Wednesday that the international community must now act against the Syrian government's crackdown on protests "in the name of humanity."

Ban told a press conference he has sent a U.N. Human Rights Council report on the Syrian regime's crackdown to the U.N. Security Council. This could increase pressure on the 15-nation council to act even though Russia and China vetoed a resolution on the crisis in October.

"In Syria, more than 5,000 people are dead. This cannot go on. In the name of humanity, it is time for the international community to act," the U.N. secretary general said.

Ban said the U.N. rights report, which highlighted that crimes against humanity may have been committed in Syria, had been sent to the Security Council and the U.N. General Assembly and it was now up to member states to take a decision.

"I hope that the United Nations and the international community will be able to take concerted, coherent action."

The U.N. leader praised action taken by the Arab League against Syria.

League foreign ministers will hold an emergency meeting in Cairo on Saturday to respond to Syria's proposal to admit observers in exchange for an end to regional sanctions.

Western nations, which proposed the Security Council resolution that was blocked by Russia and China in October, say they are waiting for the Arab League meeting to decide their next action.

Diplomats said Russia would almost certainly use its veto again unless there is a strong Arab lead on the Syria crisis.

This is the numero uno of the UN giving the green light for intervention. This will be the needed excuse for a no fly zone. Sit tight Mr Assad, your close to the mention: 'GAME OVER'

The syrian regime is not human...just like sweaty demon...it does not care how many children (sorry, I meant terrorists) die...
What goes around comes around...

First get rid of Syria, then get rid of the Hez and chop off the Iranian fingers in Lebanon so we can live in peace.

Let the sweaty prick pay the Shia murders electric bill and stop draining the rest of the country.

Sweating demon must have named himself after Nassy the black turbaned sweaty demon.

the arrogance of M8 and syria will cause their defeat... how can the whole world be wrong but only them are right....

Russia, Iran, and the Hezz are screwed when Assad falls!! It will serve them right for backing the killers of the ASSad regime.

But in the name of humanity you do not call for action on Palestine? .. or would you consider that "animality"

Bashar and his butt wipes, for the sake of each of the victems, your day will come soon. You are squarely in the crosshairs.

funny how the M8 didn t complain when libya was attacked by the NATO forces and congratulated the libyan opposition but are crying at a conspiracy in the case of syria!

after that they say that those who are against them are brainwashed people... so funny actually!