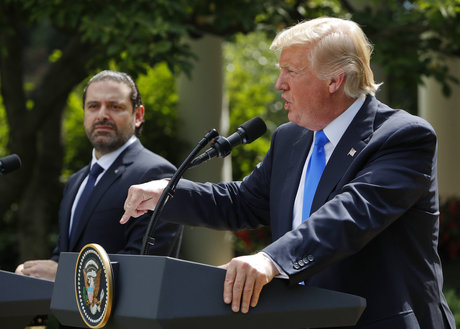 U.S. President Donald Trump has given the impression that he is not up to speed on who's fighting whom in Lebanon.

He wrongly credited the Lebanese government with fighting Hizbullah when he heaped praise on its prime minister, Saad Hariri, at the White House on Tuesday.

Hizbullah, a Shiite Islamist political party with a militant faction, actually is a partner in Hariri's government.

"Lebanon is on the front lines in the fight against ISIS, al-Qaida and Hezbollah," Trump said in a news conference with Hariri.

The Lebanese government is indeed fighting against the Islamic State group and al-Qaida. But so is Hizbullah.

Fighters from the powerful Iranian-backed group are leading a military offensive to wipe out jihadist extremists from IS and al-Qaida from areas along the Lebanese-Syrian border.

And the Lebanese government is not confronting Hizbullah militarily, as Trump said, but rather reliant on it to stay in power.

The group holds two seats in cabinet, as it has in previous governments. And while Hariri is opposed to Hezbollah's policies, particularly its decision to send fighters to shore up Syrian President Bashar Assad's forces in Syria, he has a power-sharing relationship with the group, without whose approval he would not be able to govern.

And Trump can say it without the threat of being blown up like so many who have spoken out in the past.

Hezbullah should get the Shia majority out on the streets of Lebanon to overturn Article 24's set-aside of half of Parliament for Christians. Why not? What are you waiting for?

Either a fake "Cristhian" or a sellout.

Maybe trump is predicting the future...

Everything Trump says is a misfire. But the Mustaqbots will gobble it all up.