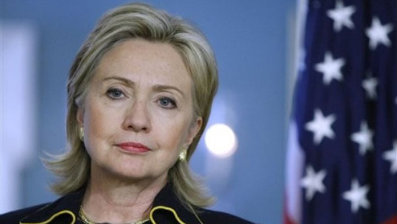 U.S. Secretary of State Hillary Clinton said Tuesday that a Hizbullah-controlled government in Lebanon would "clearly have an impact" on ties with the United States.

The comments came after Hizbullah-backed Najib Miqati was named Lebanon's prime minister-designate, giving the Iran- and Syria-backed armed group increased leverage in the deeply divided country to the anger of many Sunnis.

Clinton said Washington was following "closely and carefully" developments in Beirut, as she appeared at a press conference with Foreign Minister Trinidad Jimenez of Spain, which contributes troops to the U.N. peacekeeping force in Lebanon.

"We both share deep concerns about the influence of outside forces, and we hope to see a government emerge that will serve the interests of the people of Lebanon and sustain the independence and sovereignty of Lebanon," Clinton said.

"We are watching the situation closely and carefully in Lebanon. We are monitoring new developments," the chief U.S. diplomat said when asked how U.S.-Lebanese ties would be affected by upcoming political change.

"A Hizbullah-controlled government would clearly have an impact on our bilateral relationship," Clinton told reporters.

"Our bottom lines remain as they always have been. First, we believe that justice must be pursued and impunity for murder ended. We believe in Lebanon's sovereignty and an end to outside interference," Clinton said.

"So as we see what this new government does, we will judge it accordingly," she said.

Hizbullah and its allies on January 12 brought down Hariri's Saudi- and Western-backed government after a long-running dispute over a U.N.-backed tribunal probing the 2005 murder of ex-premier Rafik Hariri, Saad's father.

The armed party had been pressing Hariri to disavow the tribunal, which it believes will implicate Hizbullah members.

When asked if the United States would continue to offer financial aid to the Lebanese government if Hizbullah had a prominent role, Clinton spokesman Philip Crowley said Monday "that would be difficult for the United States to do."