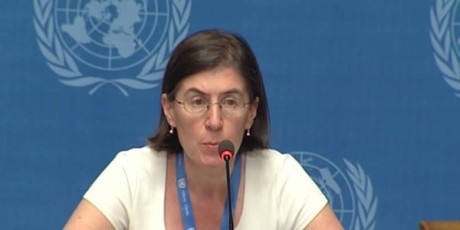 The U.N. raised doubts Friday over the validity of Venezuela's controversial weekend vote to elect a body to rewrite the constitution, insisting that no one should be forced to participate.

The Sunday vote pushed for by President Nicolas Maduro has escalated the deadly showdown between the government and opposition supporters who have dismissed the poll as illegitimate.

"We believe that constitutional processes can only be successful if they are based on broad consensus and the participation of all sectors of society," Throssell said.

Maduro has banned protests and warned that anyone who marches against the "Constituent Assembly" risks up to 10 years in prison.

"To have the right conditions for constitutional change, you need to have freedom of expression, freedom of association and freedom of peace and assembly," Throssell added.

"The wishes of the Venezuelan people to participate or not in this election need to be respected," Throssell said. "No one should be obliged to vote, while those willing to take part should be able to do so freely."

The opposition has called for nationwide demonstrations in defiance of the government ahead of Sunday's ballot.

Four months of protests against the unpopular Maduro have already claimed 112 lives, according to prosecutors.