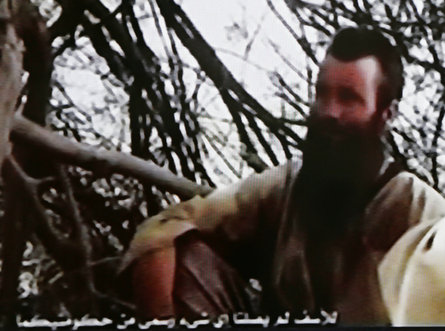 A South African man snatched from his hotel and held hostage by al-Qaida in Mali since 2011 has been freed unscathed, his country's foreign ministry said on Thursday.

Stephen McGown, 42, was grabbed in the historic trading city of Timbuktu in Mali's north along with Swede Johan Gustafsson and Dutchman Sjaak Rijke, both of whom were subsequently released.

McGown has returned to South Africa and been reunited with his family, foreign ministry official Clayson Monyela told AFP.

"It was a big surprise when he walked through the door -- when I gave him a hug, he was as sound and as strong as before, so he was obviously well treated up there," Stephen's father Malcolm told reporters in Pretoria, though Stephen himself did not attend the press briefing.

State Security Minister David Mahlobo insisted that no ransom was paid to secure McGown's release which was completed on July 29.

"We were able to actually release him without any conditions," Mahlobo told the joint press conference.

"Through our shrewd engagement supported by the African Union... Stephen is back at home.

"The relationship between the two presidents of the countries has been very important."

As for the other former hostages, Gustafsson was released in June while Rijke was freed in April 2015 by French special forces.

Rijke's wife escaped during the jihadist assault on the popular tourist hotel, but a German who tried to resist the abduction was killed.

Al-Qaida's North African affiliate Al-Qaida in the Islamic Maghreb (AQIM) had claimed responsibility for the kidnappings of the three men.

"We give him a warm welcome back home particularly that he lands home with a mother who has passed on during his incarceration," said Foreign Minister Maite Nkoana-Mashabane.

"He was just a tourist in Timbuktu. We are happy that he is a free man."

McGown's mother Beverly died in May after battling a long illness.

"It didn't quite work out the way we wanted, but we say to Stephen... 'you are strong and you've got to do what you need too'. He'll pick himself up in a little while and return to normal life," added Malcolm McGown.

Imtiaz Sooliman, chairman of the Gift of the Givers charity which was previously involved in negotiating for McGown's release, said at the time of his mother's death that Stephen's absence was beginning to "take its toll."

"We had seen the sadness in the mother's eye and watched how she patiently waited in dignified pain for the return of her son. We failed her -- my heart bleeds for her," Sooliman told local media in May.

Gift of the Givers reportedly dispatched a hostage negotiator to Mali in July 2015 to push for McGown's release but was forced to give up in May this year after hitting a "dead end."

Catherine said that on being reunited, Stephen "looked at me and said 'Your hair has grown', and I said, 'Well actually your hair is longer than mine'."

He is now undergoing medical checks.

AQIM was one of several jihadist groups that took control of Mali's north in 2012 before being ousted by a French-led military operation launched in January 2013.

The group had released several videos of McGown and Gustafsson over the years, but little was known about the kidnappers' demands.