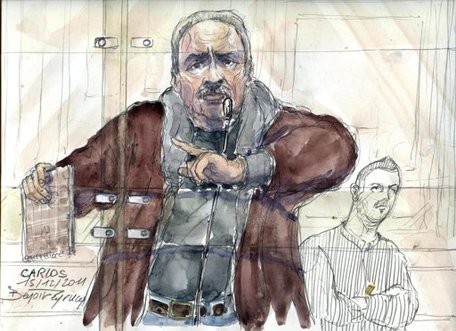 Carlos the Jackal, the flamboyant Venezuelan who symbolized Cold War terrorism, was sentenced to life in prison — again — in a Paris trial that ended late Thursday with him rallying for revolution and weeping for Moammar Gadhafi.

Carlos, whose real name is Ilich Ramirez Sanchez, hasn't seen freedom since French agents spirited him out of Sudan in a sack in 1994. He's already serving a life sentence in a French prison for a triple murder in 1975, the worst punishment meted out in a country that does not have the death penalty.

Once one of world's most-wanted men, the former gun-for-hire and self-proclaimed revolutionary was escorted out of his cell and back to court last month to face charges that he instigated four bombings in France in 1982 and 1983 that killed 11 people and injured more than 140 others.

Just before midnight Thursday, the court found Ramirez guilty in all four attacks, and sentenced him to life in prison with no possibility of parole for 18 years.

Combative and defiant throughout the six-week trial, the 62-year-old Ramirez denied any role in the attacks.

His lawyer and romantic partner, Isabelle Coutant-Peyre, told The Associated Press that he will appeal. She said Ramirez was the victim of a politicized process and criticized investigators for using archives of former communist bloc countries to help in the prosecution.

Lawyers for the victims welcomed the long-awaited verdict, nearly three decades after the bloody bombings.

Ramirez sowed fear across Western European and Middle Eastern capitals during the Cold War, with believed ties to hijackings and killings for far-left and Palestinian terror groups. Ramirez, relishing the rare public attention at the Paris trial, used the defendants' stand as a pulpit and spoke for five hours Thursday in his final testimony.

"I am a living archive. Most of the people of my level are dead," he said, reading from a spiral notebook in a speech that at times rambled far from the cases at hand. Three hours into it, he said, "Excuse me, I am taking my time, it's a small recapitulation."

In an emotional finale, he read a text in memory of longtime Libyan leader Gadhafi, a sort of ideological brother who funded anti-Western attacks in his own heyday. Gadhafi was killed in October after rebels backed by NATO airstrikes pushed him from power.

"This man did more than all the revolutionaries," Carlos said, sobs choking his voice as he ended the monologue with, "Long live the revolution!" A crowd of young men in the gallery cheered in support.

Venezuelan President Hugo Chavez said he sought to ensure that Ramirez's rights were respected during his trial in France. Chavez has previously praised Ramirez as a "revolutionary fighter" and has said he doesn't view him as a terrorist. There was no immediate response to the verdict by the Venezuelan government on Thursday.

The trial concerned an attack in March 1982 on a Paris-Toulouse train, an April 1982 attack on the Paris offices of an Arabic-language newspaper, and two attacks on New Year's Eve 1983, one on a high-speed TGV train and another on a train station in Marseille.

Investigators said the first two attacks were aimed at getting French authorities to free Ramirez' then-girlfriend Magdalena Kopp — with whom he later married and had a daughter — and comrade-in-arms Bruno Breguet.

During a career in international terrorism lasting two decades, Ramirez is believed to have "freelanced" for Germany's Baader-Meinhof, the Turkish Popular Liberation Front, the Japanese Red Army, the Basque separatist group ETA and Italy's Red Brigades. He was the chief suspect in the 1975 hostage-taking of OPEC oil ministers that left three people dead.

Safe havens grew scarce and allies turned dubious for Ramirez once the world was upended by the fall of communism starting in 1989. French secret agents snatched him from his refuge in Khartoum, Sudan in 1994, and a French court convicted him in 1997 of the 1975 murders of two French secret agents and an alleged informer.

In this year's Paris trial, three others were prosecuted in absentia. The court convicted two of his accomplices, Palestinian Kamal al-Issawi and German Johannes Weinrich, giving them life sentences, and acquitted a third, Christa Margot Frohlich.

Weinrich, said to head Ramirez' European operations and a former member of Germany's violent far-left Red Army Faction, is behind bars in Germany, Frohlich remains at large, and al-Issawi's whereabouts are unknown to French authorities.

"In the trial it was shown overwhelmingly... that the French government didn't have proof against Ilich, that really there were many deficiencies, a great deal lacking in the case brought by prosecutors," told The Associated Press in a phone interview in Venezuela.

He also condemned French authorities for capturing his brother in Sudan in 1994.

Vladimir Ramirez has repeatedly led protests in Venezuela demanding his older brother's repatriation to his homeland.