US Says IS Convoy Still Stranded in Syria 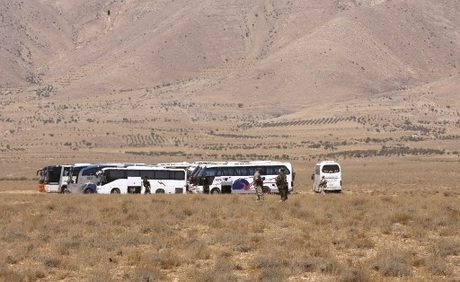 The U.S.-led coalition says a convoy of hundreds of Islamic State militants and civilians is still stranded in government-held territory in Syria after it prevented them from being relocated from the Lebanon-Syria border under a deal with Hizbullah.

The coalition said that it has passed a message to the Syrian government through Russia asking it to separate the fighters from civilians. It says it has not taken any action to prevent food and water from being brought to the evacuees.

Lt. Gen. Stephen Townsend says "the Syrian regime is letting women and children suffer in the desert. This situation is completely on them."

The IS fighters and their families evacuated a week ago under a deal with Hizbullah, which agreed to give them safe passage to far eastern Syria, near the Iraqi border, in exchange for the remains of Lebanese soldiers captured in 2014.

The U.S.-led coalition and Iraq have condemned the deal, saying IS fighters should be killed on the battlefield.

The coalition has carried out airstrikes to prevent the convoy from reaching IS-held territory, but has not targeted the evacuees themselves.

Who is protecting Daesh other than Ebola and the Butcher? Guess why?

Just a few weeks ago, US forces let ISIL convoys evacuate as well. That is how you win back important areas. They will be dealt with and killed later.

they have been heeding your terrorist hezbollah's calls for being humane to ISIS.