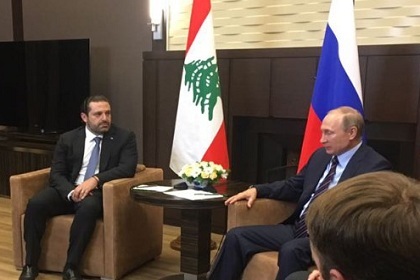 “We discussed many issues that are of interest to the two countries, especially the economic issues... We also discussed Russia’s military assistance to Lebanon and ways to develop this relation and facilitate the purchase of Russian equipment through a credit line,” Hariri said after the talks.

“We discussed the situation in the region and agreed on many things and we are in the process of developing the political and economic relation for the benefit of the two countries,” he added.

Asked whether he asked Putin to help in the issue of delineating and demarcating the border between Lebanon and Syria, Hariri said: “We discussed several issues and touched on this issue briefly. The focus for me was on ways to develop our economic relations.”

As for the issue of preserving Lebanon’s “neutrality”, the premier said: “President Putin supports this very much, especially since Lebanon has been able to protect itself from all the repercussions of what is happening around it. It has shown that the path to stability is political understanding.”

“When a political solution is reached in Syria, Lebanon may be a hub for the reconstruction of Syria,” Hariri added.

At the beginning of the meeting, Hariri had said Lebanon “hopes the economic ties and military cooperation will rise to the level of the political relations between the two countries.”

Hailing the Lebanese-Russian ties, Putin for his part said it is important for him to “know the stances of the leaders in the region.”

“This is an opportunity to discuss these issues with you,” the Russian leader told Hariri.

Putin also said ahead of the meeting that agreements signed between the two countries during Hariri's visit to Russia would "work toward the positive development of our bilateral inter-state relationship," Russia's RIA Novosti news agency reported.

He had arrived in Russia on Sunday evening.

President Putin needs to know the stances of the leaders in the region... maybe PM Hariri can explain