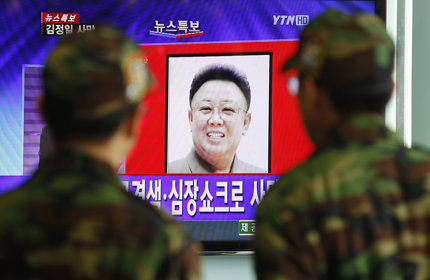 The United States was Sunday "closely monitoring" reports on North Korean leader Kim Jong-Il's death and said it was committed to stability on the Korean peninsula and the security of its allies.

Kim's death, announced by North Korea's official media, posed an immediate and grave foreign policy crisis for Washington and its allies, given Pyongyang's history of belligerence and its nuclear arsenal.

"The President has been notified, and we are in close touch with our allies in South Korea and Japan. We remain committed to stability on the Korean peninsula, and to the freedom and security of our allies."

A State Department official said that Secretary of State Hillary Clinton was also briefed on Kim's death, as the U.S. National Security machine buzzed into life late on a Sunday night.

U.S. officials declined however to be drawn into further discussions of the U.S. response to Kim's death or its geopolitical implications.

U.S. officials were aware that Kim, who ruled ruthlessly, shackling his own people with his personality cult and confining them to famine and poverty, had been ill, and that a transition was under way in Pyongyang.

But privately, they have expressed concern about Kim's chosen successor, his third son Kim Jong-Un, and admit their knowledge of the isolated Stalinist state's next ruler is limited.

President Barack Obama's White House has made a point of repeatedly stressing that there is no daylight between it and its allies South Korea and Japan on policy towards North Korea.

Kim's death came as North Korea and the United States made tentative efforts to restart stalled six-nation talks on the North's nuclear program.

Nuclear envoys from Washington and Pyongyang met in New York in July and in Geneva in October, but reported no breakthrough. South Korea's Yonhap news agency said that a third meeting could have taken place soon.

The North quit the six-party forum, which involves the United States, China, the two Koreas, Japan and Russia, in April 2009, a month before staging its second nuclear test.

The North wants the forum to resume without preconditions and says its uranium enrichment program -- first disclosed to visiting U.S. experts one year ago -- can be discussed at the talks.

The United States however says the North must first show "seriousness of purpose" toward denuclearization by shutting down the program.

The North has said that it is making rapid progress in enriching uranium and building a new reactor.