Catalonia on Uncertain Footing as Elections Ruled Out 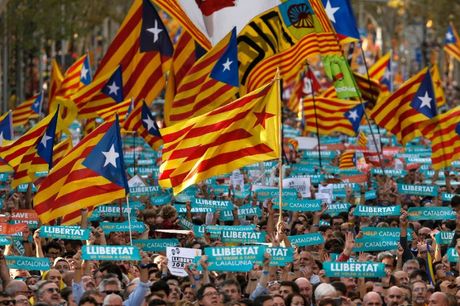 Catalonia's secessionist leader opted Thursday not to call regional elections, which had been seen as a way to ease Spain's worst political crisis in decades and avoid a drastic move by Madrid to seize control of the semi-autonomous region.

The decision placed the region of 7.5 million people on an uncertain footing a day before the Senate is due to approve measures to depose Catalonia's leaders and take over its institutions, police, purse, and public broadcaster to stop the region's independence drive.

Under pressure from all sides, after some 9,000 independence supporters staged a protest according to city police, Carles Puigdemont said he had been "willing" to call elections but received "no guarantees" from Madrid to make this possible.

In a televised address, looking weary, he instead passed the ball to the regional parliament, which met Thursday evening, "to determine the consequences" of Madrid's looming power grab.

Separatist lawmakers hold an absolute majority in the Catalan parliament, and many want to declare unilateral independence.

The central government stood firm Thursday, insisting it was "fulfilling a legal obligation, a democratic obligation and a political obligation," in its response to Catalonia holding an unlawful and unregulated independence referendum on October 1.

"The main responsibility of a government, of any democratic government, is to respect the law and ensure it is respected," Deputy Prime Minister Soraya Saenz de Santamaria told the Senate in the Spanish capital after Puigdemont's speech.

In the Catalan legislature, opposition lawmakers pleaded with Puigdemont to find a solution to the standoff closely watched by a European Union wary of nationalist and secessionist sentiment, particularly after Britain's dramatic decision to leave the bloc.

"You still have time to return to legality and call elections," Ines Arrimadas, regional leader of the anti-independence Ciudadanos party, said in parliament.

Miquel Iceta, who heads up the Socialist party in Catalonia, insisted: "You could go to the Senate tomorrow. I offer to accompany you. If you want to ask for and offer political dialogue, I will be at your side."

The Spanish senate, in which Prime Minister Mariano Rajoy's Popular Party holds a majority, is scheduled to approve the power seizure on Friday.

This will effectively leave Puigdemont and his team out in the cold from Saturday, but is likely to anger many Catalans who, while divided on independence, treasure their autonomy.

Earlier Thursday, Puigdemont warned such a move would escalate the crisis.

In parliament, some among allies called for a push to independence to honor "the mandate of the Catalan people in the referendum on October 1."

But only about 43 percent of eligible voters -- some 2.3 million -- turned out, with many anti-secessionists staying away, and others prevented from voting by Spanish police.

- Independence should 'be done' -

The mood in Barcelona on Thursday was mixed, as many wished for elections to ease the crisis, while others wanted independence now.

Manuel Herrera, a 61-year-old parking warden, said he would be happy with a vote.

"I want to stay in Spain so that more companies don't leave," he said, sitting on a scooter, smoking a cigarette, a coffee in hand.

Fears for Catalonia's economy have increased as uncertainty persists over the independence drive, with some 1,600 companies already having moved their legal headquarters out of the region.

But for those who support independence, this is not an option.

"We're impatient to see the proclamation of the Catalan republic," said Natalia Torres, 19.

"It should already be done."

Catalans are fiercely protective of their language, culture and autonomy -- restored after the 1939-75 dictatorship of Francisco Franco.

Spain's Economy Minister Luis de Guindos acknowledged Thursday there could be "resistance" to officials sent from Madrid to administer Catalonia in the event of a takeover, and urged cooperation from civil servants.

There had already been "a drop in consumption and paralysis of investments," the minister added, as a result of uncertainty sparked by the crisis.

Observers fear the standoff will spark unrest in the region, where industry bodies say tourist bookings are already on the decline.