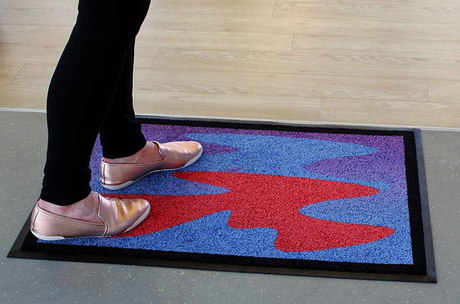 It may look like an ordinary door mat, but its creators insist the conceptual art piece could encourage alien life to visit Earth -- and help create a new kind of space archeology.

Dubbed the "Cosmic Welcome Mat" it features swirls of red, sky blue, and violet against a black border, and is meant to convey a warm reception to all sentient life in the universe.

Experimental philosopher Jonathon Keats, who created the rug with space archaeologist Alice Gorman of Flinders University in Australia, aims to have similar mats placed all over the world.

Keats hopes eventually there will be a replica rug on "everybody's doorstep", adding that he is in early talks with NASA to have one placed at the International Space Station.

He says he has also been talking to the United Nations about a mat being placed at its headquarters in New York. An updated design of the mat is due to go on display at a Los Angeles gallery on Friday.

"I have been fascinated by Fermi's Paradox: if there's intelligent life throughout the universe, where is everybody?," Keats, also a conceptual artist, told AFP at the recent International Astronautical Congress in Adelaide.

"I started thinking about how we might be perceived by beings elsewhere in the universe. It struck me that we really might not be seen as being especially friendly."

His 1950 question "Where is everybody?" has since sparked debate about the contradiction between the probability of extraterrestrial civilizations and why humans have not encountered them.

Gorman said another benefit to the project would be that some of the dust the mats accumulate would be from outer space.

"Because there's about 40,000 tons (36,300 tonnes) of extraterrestrial material that falls to the surface of the Earth every year, we know there'll be a cosmic component to the dust," she explained.

Brushing an enlarged version of the mat on display to collect samples, she added: "We'll be drawing that into our analysis as well to create a new kind of archeology."

He said red in the rug represents alien life, the black evokes outer space, the sky blue is a reference to earth, while the violet is meant to signify artificial indoor light.

This year marks the 40th anniversary of NASA's first Voyager mission, where twin unmanned spaceships sent to explore other planets each carried a golden record and a record player.

The tracks hold sounds from Earth -- such as greetings in 55 languages, a Pygmy girls' initiation song and the Chuck Berry song "Johnny B. Goode" -- and images, in case the spacecraft encountered aliens.

In August it picked up 15 radio bursts from an unknown source, prompting debate over whether it could be extraterrestrial technology.