Business Leaders Bow to Xi as Communist Party Pushes In 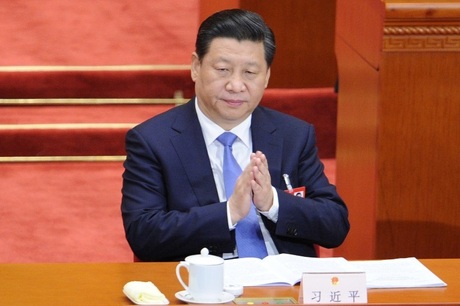 Chinese billionaires are boasting about their Marxist bonafides. The Communist Party is tightening its grip on state-owned companies. And foreign companies are being asked to invite party cells into their offices.

Under President Xi Jinping, the country's ruling party is muscling back into business, expanding its reach in private enterprise and even laying out a plan for the government to take stakes in high-profile tech and media companies.

With a stronger mandate after receiving a second term as head of the party Wednesday, Xi plans to deepen its control in "all areas of endeavor in every part of the country", as he told leaders in a three-and-a-half hour speech last week.

In September, the Chinese Communist Party released a new document on entrepreneurship calling in part to strengthen teaching of "socialist core values" to the new generation of entrepreneurs.

It is a significant change for the CCP, which has long had a fraught relationship with the business world.

Since kicking off economic reforms in the late 1970s, Beijing has allowed private enterprises a free rein in many sectors, while slowly loosening its grip on the state-owned sector, which comprises "strategic" industries such as steel and telecommunications.

"Key technology used to be controlled by state-owned companies and the party focused on those companies," said Mark Natkin, managing director at technology consultancy Marbridge Consulting.

But "as private enterprise has grown stronger and become heavily woven into society, there is greater desire by the party to be involved."

China's capitalists are getting on board as the state has taken a bigger role in picking winners and a harder line against those perceived to be defying the party's aims.

This year, a few business icons have disappeared, and others like Wang Jianlin, chairman of entertainment conglomerate Dalian Wanda, have faced immense pressure from regulators over the build up of debt at their companies.

Listening to Xi's speech, "I was overwhelmed by emotions," Wang told the state-run Beijing News.

"As a Chinese, I've never been so proud."

The sentiment was echoed by other titans of industry like Jack Ma of Alibaba, Zhang Jindong of Suning, and Liu Chuanzhi of Lenovo, who told Beijing News the party will unite the people to "realize grand dreams."

To celebrate Xi's address Tencent, China's largest tech company, created an online game for the masses to applaud the nation's president which has racked up 1.4 billion claps.

The app's release followed a report in the Wall Street Journal that the Chinese state is looking to take a one percent stake and gain a board seat at the company, along with other major internet companies.

The party has already moved to strengthen control at state-owned enterprises, with dozens of publicly traded companies in Hong Kong rewriting their business charters this year to formalize the shift.

From plants in southern China, Guangzhou Automobile Group pumps out Honda Odysseys, Toyota Camrys and Jeep Renegades in partnership with foreign automakers. In July, the carmaker revised its business charter.

The CCP constitution was written into the document, according to filings. Major board decisions are now made after first consulting the company's party committee.

"When the board appoints high level executives, the party committee will deliberate and give opinions and suggestions on the candidates," a filing said.

Investment fund Blackrock, which holds a 7 percent stake in the company, declined to comment on how it voted on these changes.

A spokeswoman for Guangzhou Automobile Group said the changes were made to "meet party building requirements" and in accordance with business regulations.

"The resolution was approved at a shareholder meeting showing the majority of the company's shareholders support the resolution," she wrote in an email.

The party has also expanded its presence in foreign firms.

Of the more than one hundred thousand foreign-funded companies in China, 70 percent had set up party organizations by the end of 2016, according to Qi Yu, deputy head of the CCP's Organization Department.

Foreign executives view these organizations within their firms as "a positive force for company development," Qi said during the recent Beijing congress.

Some of the largest foreign-owned companies in China like Mary Kay and Walmart have opened party branches.

Analysts say these organizations within multinationals are increasingly active, with their activities varying from the mundane like screening party videos to the helpful like communicating nationally mandated priorities.

In some cases, "party cells want to weigh in on strategic decision making," said Andrew Polk, an economist at Trivium Research.

This summer the European Union Chamber of Commerce in China president Mats Harborn told a meeting there have not yet been any demands to allow party cells to participate in business decisions.

But, if that were to happen, he said, "it would be highly concerning for attracting foreign investment into China."

They want their cake and eat it too