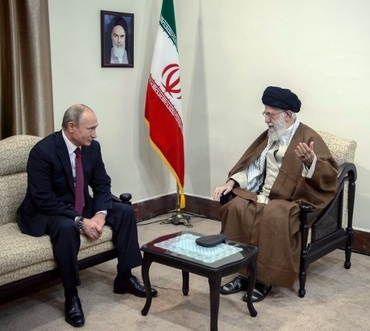 The Kremlin strongman's first visit to Iran since 2015 comes as Moscow seeks to turn its game-changing military intervention in Syria into a concerted push to bring a halt to fighting in the country with the help of Tehran, President Bashar al-Assad's other key backer.

"We are working very productively with Iran and we manage to coordinate our positions on Syria," Putin said after talks with Iranian counterpart Hassan Rouhani and the Islamic republic's supreme leader Ayatollah Ali Khamenei.

The Russian leader insisted that thanks to a joint push with rebel supporter Turkey, "the situation on the ground in the fight against terrorism and the negotiating process are developing very positively."

Khamenei said the "good cooperation between Tehran and Moscow in Syria shows that the two countries can realize their objectives even in difficult terrain", and insisted that all solutions to the conflict come "from inside the country."

Russia, Iran and Turkey pledged after a latest round of negotiations in Kazakhstan on Tuesday to bring the Syrian regime and its opponents together for a "congress" to push peace efforts in the Russian city of Sochi on November 18.

The three key players have organized a series of peace talks in the Kazakh capital Astana this year, agreeing on the establishment of "de-escalation" zones in various parts of the war-torn country.

Putin's visit -- which in addition involved a three-way summit with Rouhani and the leader of ex-Soviet Azerbaijan Ilham Aliyev -- also followed a hike in tensions over the 2015 Iran nuclear deal after U.S. President Donald Trump refused to certify the agreement last month.

Tehran signed the deal, which saw sanctions lifted in return for limits on Tehran's atomic program, with six countries including Russia and the United States, and Moscow has slammed Trump's "aggressive and threatening rhetoric" against Iran.

While Putin said only that the two sides had discussed the deal, Russian companies looked to press on with taking advantage of the business opportunities that it has presented.

State oil giant Rosneft and the National Iranian Oil Company signed a roadmap agreement with an eye to developing joint projects worth up to $30 billion, Rosneft head Igor Sechin was quoting as saying by Russian news agencies.

Sechin said the two sides were looking to seal binding deals within a year to work on a "whole series of fields, oil and gas", and that eventual output could total 55 million tonnes of oil a year.

The potentially mammoth deal would boost Rosneft's push in the Middle East and aid the Kremlin's ambitions of bolstering its influence in Iran and the broader region.

Moscow and Tehran have had close political and economic relations, and in the nuclear field Russia has already built one reactor at Iran's Bushehr plant and just started work on two new ones.

The military might of Moscow and Tehran in Syria has helped prop up Assad's forces and turn the protracted conflict in his favour with a string of key battlefield victories.

Since the start of the year, Russia has looked to cement the gains from its intervention by spearheading the peace push at talks in Kazakhstan, positioning itself as a broker between key players Iran and Turkey and largely bypassing the West.

Up until now the focus has been on quelling the violence on the ground and the three powers have established four "de-escalation zones" around rebel-held territory in the country.

The zones were initially credited for bringing about a significant reduction in bloodshed, but international aid groups say they are currently failing to curb the fighting.

Now Moscow seems keen on expanding its peace drive in search of a political settlement.

The push on Syria comes as ties between both countries and Washington have frayed still further since Trump moved into the White House in January.

Despite initial opposition, Trump in August signed off on a sanctions bill targeting Russia, Iran and North Korea after it was passed overwhelmingly by Congress.

Putin's arrival came a day after the U.S. Treasury added 40 Iranian individuals and entities already targeted by sanctions to a counter-terrorism blacklist.