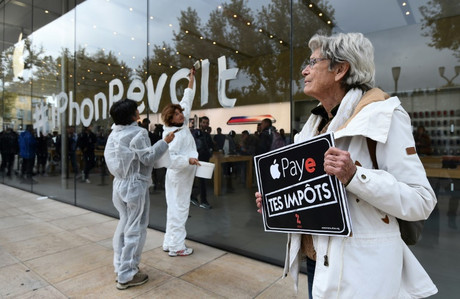 New revelations Monday from the "Paradise Papers" shed light on Apple's tax avoidance strategy which shifted profits from one fiscal haven to another as well as loopholes employed by Nike and Formula One champion Lewis Hamilton.

They are the latest disclosures from a trove of documents released by the US-based International Consortium of Investigative Journalists (ICIJ) concerning secretive offshore deals that have proved deeply embarrassing.

According to documents cited by the New York Times and BBC, the offshore legal services firm Appleby helped the iPhone maker shift tens of billions of dollars from Ireland to the Channel Islands when it appeared to face a tougher stand on taxes by Dublin.

The report said Apple transferred funds to the small island of Jersey, which typically does not tax corporate income and is largely exempt from European Union tax regulations.

Apple did not immediately respond to an AFP query on the report but told the New York Times it follows the law in each country where it operates.

At a 2013 congressional hearing, Apple chief Tim Cook denied the use of "gimmicks" to avoid taxes. The company is now facing an EU demand for some $14.5 billion in taxes based on a ruling that its tax structure in Ireland amounted to illegal state aid.

The leaked documents showed the driver received a £3.3 million ($4.4 million, €3.7 million) tax refund in 2013 after his luxury plane was imported into the Isle of Man -- a low-tax British Crown Dependency.

Representatives for Hamilton could not be reached by AFP for comment.

A separate report appearing in France's Le Monde said Nike used a loophole in Dutch fiscal law to reduce its tax rate in Europe to just two percent compared with a 25 percent average for European companies.

The tax savings came from Nike's use of an offshore subsidiary which charged royalties to the company's European subsidiaries, the report said.

Separately, the documents showed the Russian connection of US Commerce Secretary Wilbur Ross through a complex web of offshore investments.

They revealed Ross's 31 percent stake in Navigator Holdings partnership with Russian energy giant Sibur, which is partially owned by Putin's son-in-law Kirill Shamalov and Gennady Timchenko, the Russian president's friend and business partner who is subject to US sanctions.

The cabinet member's ties to Russian entities raise questions over potential conflicts of interest, and whether they undermine Washington's sanctions on Moscow.

The US imposed sanctions on Russian entities and individuals over the annexation of Crimea and the crisis in Ukraine.

The billionaire investor told Bloomberg on Monday he was not intending to hold onto his stake: "I've been actually selling it anyway but that isn't because of this."

On Monday, Russian politicians played down the leaks, saying the deals mentioned were legal and not politically motivated.

In a statement reported by Russian news agencies, Sibur voiced its "amazement at the politically charged interpretation in some media of ordinary commercial activity."

The documents showed around £10 million ($13 million, 11 million euros) of the queen's private money was placed in funds held in the Cayman Islands and Bermuda, as first reported in Britain by the BBC and the Guardian newspaper.

Theresa May's spokesman said the British prime minister "wants people to pay the tax that they owe," while cautioning that holding offshore investments was not an automatic sign of wrongdoing.

"We have been clear that avoidance and evasion is never acceptable," he said, ahead of the British parliament discussing the Paradise Papers on Monday.

A spokeswoman for the Duchy of Lancaster, which provides the monarch with an income and handles her investments, said: "All of our investments are fully audited and legitimate."

The 13.4 million documents were first obtained by the German newspaper Suddeutsche Zeitung, and shared with the ICIJ and partner media outlets.

The findings were described as a "scandal" by European Economics Affairs Commissioner Pierre Moscovici.

"In light of these shocking revelations, I call on member states to rapidly adopt a European tax haven blacklist, as well as other dissuasive measures," he said in Brussels.