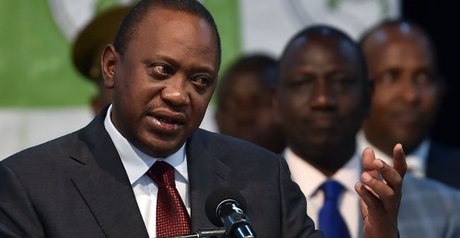 Celebrations erupted in ruling party strongholds, but tensions remained high in areas loyal to veteran opposition leader Raila Odinga, which have been rocked by protests during the dramatic four-month election process.

The ruling paves the way for Kenyatta to be sworn in on November 28.

"The court has unanimously determined that the petitions are not merited. As a consequence, the presidential election of 26 October is hereby upheld as is the election of the third respondent," said Chief Justice David Maraga, referring to Kenyatta.

Maraga had in September annulled an August election due to "irregularities and illegalities", a historic decision hailed across the globe as an opportunity to boost Kenyan democracy.

However, the ruling -- a rare victory for Odinga -- only deepened acrimony and protests that have left 52 people dead -- mostly at the hands of police -- since the first election.

Accusing the IEBC elections commission of failing to make fundamental reforms to improve the vote, Odinga withdrew from the October ballot which he urged his followers to boycott.

- 'Toxic environment' -In the run-up to the vote, a top election official fled the country, saying the poll would not be credible, and IEBC chairman Wafula Chebukati himself said he could not guarantee a free and fair election.

Election day was marred by chaos in opposition strongholds, with polling stations unable to open in 25 constituencies.

The boycott handed Kenyatta a landslide victory of 98 percent, although turnout was only 39 percent.

This time, Odinga and his National Super Alliance (NASA) coalition did not go to court to challenge the second election, but a former politician and two rights activists did.

They pointed to procedural questions, the toxic democratic environment, and Chebukati's own questioning of the process.

However the six-judge bench dismissed the petitions in a matter of minutes.

- 'Decision under duress' -In a statement, Odinga said the ruling "did not come as a surprise", nor did it alter his opposition to a government he regards as illegitimate.

"It was a decision taken under duress. We do not condemn the court, we sympathise with it," he said.

News of the court's decision sparked celebrations in Kenyatta's strongholds.

"Let NASA people now go and mourn quietly and allow us to celebrate. They were laughing last time, today it is our turn," said Jackson Mandago the governor of Uasin Gishu county.

"We are happy that we will not have another election until 2022."

But while many will be breathing a sigh of relief that the prolonged election process is drawing to an end, tensions remain high and it was unclear how Odinga's supporters would react to Kenyatta being sworn in.

Protesters began gathering in the western city of Kisumu, an Odinga stronghold, where they set a vehicle alight, an AFP correspondent said.

"Maraga has gone against our wish. They could have nullified it because that was not an election. It was just done in parts of the country," said Mercyline Akinyi.

"We will wait for Baba (Odinga), to tell us the way forward."

Clashes had erupted in Nairobi's Mathare slum on Sunday after four bodies were found in the street, with outrage spreading to Kibera and protests also taking place in Kisumu.

Nairobi police chief Japheth Koome said the cause of the four deaths was not immediately clear but that the victims appeared to have been hit by a blunt object, while one had also been cut.

However, the opposition claimed the four had been shot dead, and angry residents blamed members of Kenyatta's Kikuyu tribe.

Tensions had also risen on Friday when a mass opposition demonstration to welcome Odinga back from a trip overseas turned violent, with three demonstrators shot dead in Muthurwa, a suburb not far from Mathare.