Netanyahu, Macron to Discuss 'Ideas to Stabilize Situation in Lebanon' 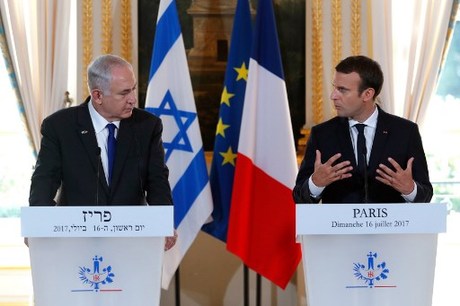 Israeli Prime Minister Benjamin Netanyahu said Monday he will meet French President Emmanuel Macron in Paris in early December to discuss threats against Israel from Hizbullah and Iran and "ideas to stabilize the situation in Lebanon."

The prime minister told his Likud party at a meeting Monday that he spoke with the French president "at length" the previous day.

Lebanon was plunged into crisis earlier this month by the surprise resignation of Prime Minister Saad Hariri.

Hariri recently traveled to France from Saudi Arabia, where he had made the announcement.

Netanyahu said he and Macron agreed to meet to "see if we can adopt similar approaches, as much as possible, concerning this threat and the nuclear agreement with Iran."

Israel the enemy of Lebanon, that bombed Lebanon into ruins, wants to stabilize the situation now?

To hell with Macron and Netanyahu

Had there been no Ebolas, they would not have bombed us! Had you not abducted their soldiers, they would have left us in peace. Had you never existed, they wouldn't even have a militarized border with us!

France is a Terrorist State!!! if the State of France of the sec. XXI promoted the Islamization of Europe gonna defende the interests of Lebanon !!!??? France defends the Islamization of Lebanon via democratic...France do agree with the Lebanese people that priority is Return of Refugies...the Prioriti for the State of Macron is the defense of the Interest of Meca in Europe and Lebanon....Macron defends for Europe the same that defends for Lebanon...conclusio: Macron is Daesh !!! Imagine now the Europe liderated by Macron...( German enter in a political chaos...)... Great Britain is out of EU...Macron in front of the desteny of Europe!!!??? the France have huge traditions persecution of the Cristhians, and now find alies in "Great Lebanon" to cut the roots of portuguese civilization !!!???..

.the Macron have a dream...turn Lebanon a Republique like the French...persecuted the Cristhians and venerated the Mecas...the new big economic project in Lebanon, is a Huge Investimente Saudi-France-Israel!! The Creation of Hiper Mega Cities of Mollembeqs in Lebanon...greatest than Tripoli !!!!...that project have the agree of Israel, Netaniyau go visit France to say to Macron that the Jewish Banks aprove and gonna finance that project...the Only problem is Aoun!!! !! for exist the Investemente Israeli-Saudi-French in Lebanon , Aoun must acept one condition, give the Lebanese nacionality to the refugies...

Israel an Iran are lovers, both exploiters of Christians, and both illegal occupiers of land that doesn't belong to them. Equally as inbred too, if you think about it there very genes will be there undoing given their excessive inbreeding.