Hariri Meets Berri and Daryan, Says Arab States 'Inclined' to Back His 'Approach' 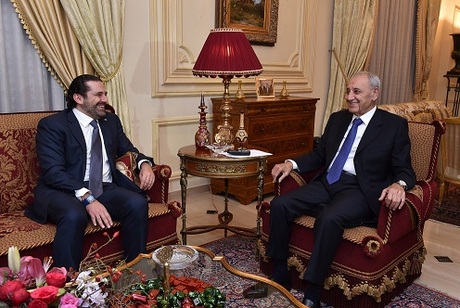 “We discussed the consultations that we intend to carry out, both him and I, about the issue of the dissociation policy, and its main principle is to spare Lebanon any difficulties,” said Hariri after talks with Berri in Ain el-Tineh, which were attended by Hariri's adviser Nader Hariri and Berri's aide Ali Hassan Khalil, who is also the finance minister.

He said honoring Lebanon's so-called dissociation policy would “immunize our ties with our Arab brothers and would put Lebanon in a position in which it can have a clear dialogue with everyone, especially regarding regional disputes, especially that we are a small country.”

“Our political camp must also practice real dissociation – in the media, practically and in all matters,” Hariri added.

Asked whether his decision to put his resignation on hold was coordinated with Saudi officials, Hariri said: “I suspended it because the president asked me to do so and I suspended it because I found out that the political parties are showing positivity regarding dialogue and consultations... The dissociation policy should turn from words into action in order to spare Lebanon any problems.”

“The president, whom I thank for the sympathy he showed towards me, asked me for this, and the least I can do is to respond to his call,” Hariri added.

Asked whether the Cabinet will convene now that he has reversed his resignation, the premier said that he wants to “focus on consultations.”

“I have a lot of mail that accumulated throughout the previous period and I will start signing it as of tomorrow,” he added.

Moreover, Hariri stressed that positive results can be achieved, noting that “Arab brothers” understand his stance.

“They know what we are trying to do, whether yesterday with (Egyptian) President (Abdel Fattah) al-Sisi, or even in the Kingdom of Saudi Arabia and also today in the UAE. There is positivity regarding the dissociation policy and there is an inclination to back our approach. The French president is also following up closely on this issue for the sake of Lebanon's stability,” the PM added.

“The dissociation policy is essential in the ministerial Policy Statement and this is what we should emphasize and implement,” Hariri said after the talks.

“We should seek Lebanon's interest and only Lebanon's interest. We are in a burning region and there are things that we should stay away from. I'm talking about all political parties, not only about a single party, and this means that the dissociation policy must apply to everyone and not only to a single party,” the premier added.
.
yes...Lebanon must full apply the dissociation policy, without delays...Lebanon must increase exponential the velocity of the refugies return...in Lebanon the refugies are associated to the War of Sheas vs Saudis-Israel...

Any ideas on how should Lebanon apply the disassociation policy.

Like I mean do we pull back the fighters from next door is that why we have refugees?

yes i have one idea...the refugies can choose or Syria or Saudi Arabia...is the simple form for the disassociating policy...Syria or Saudis...iu have refugies because of the Islamic Wars...

Good too see you are getting close...

In regards to dissociation

Who from Lebanon is fighting next door possibly contributing to the refugee increase in Lebanon?

i dont know...2 million of refugies must start to return without more delays to they homes or go to Saudi Arabia...it´s the priority of Lebanon!!! the dogs that put Syria in fire must receveid the refugies not Lebanon...the only way to dissociated lebanon is the increase the velocitie of return the refugies...