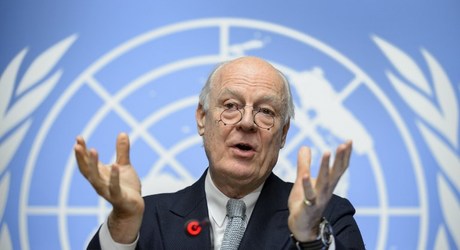 Talks aimed at ending the war in Syria restarted Tuesday with the government enforcing its will, warning the United Nations it would not tolerate any discussion of President Bashar al-Assad's ouster from power.

Assad's negotiators skipped the opening of the U.N.-backed talks, delivering another blow to negotiations that have achieved little through seven previous rounds.

After arriving in Geneva late Monday, rebel delegation chief Nasr al-Hariri told reporters that his camp was still insisting on Assad's removal as part of any peace deal, defying calls for moderation.

Damascus had initially refused to confirm it would attend the talks with the opposition maintaining its hardline stance on the president, but the U.N. announced that government representatives will arrive on Wednesday.

But before agreeing to come, Assad's envoys secured key concessions from de Mistura.

"During intense discussions over the last two days, de Mistura pledged to the government delegation that there would not be any... discussion of the Riyadh statement", an opposition text that references Assad's ouster, a source close to the government told AFP.

Keeping the Assad issue off the table may also suit de Mistura, who has said he wants this round to focus on a new constitution for Syria and U.N.-supervised elections.

Eastern Ghouta, under siege by government forces since 2013, is one of the last remaining rebel strongholds in Syria and violence there has increased significantly in recent days.

De Mistura had voiced hope the coming round would mark the first "real negotiation" on a possible deal to end the six-year war which has claimed more than 340,000 lives and left Syria in ruin.

He has also warned the opposition that intransigence on the Assad issue might no longer be tenable.

In September, he said the opposition needed to be "realistic" and accept that "they didn't win the war," a statement supported by facts on the ground.

Backed by Russia's military support, Assad's government has regained control of 55 percent of the country, including major cities including Damascus, Aleppo, Homs and Hama.

The rest is carved up between rebel factions, jihadists and Kurdish forces.

The decision last week by Syrian opposition groups to send a single delegation to Geneva raised hopes of a possible breakthrough.

The new rebel negotiating team includes members of the Saudi-backed High Negotiations Committee (HNC), which insists on Assad's departure, as well as representatives of groups based in Moscow and Cairo that have a more moderate stance on the president.

Despite Hariri's firm public position on the Assad stalemate, a European diplomat said the situation was fluid.

"We expect (the opposition) will be pragmatic and flexible," the diplomat said, requesting anonymity.

A flexible opposition will likely help the U.N.'s peace push, which has been overshadowed by negotiations spearheaded by Moscow.

Russia and its fellow ally Iran, along with rebel-backer Turkey, have hosted negotiations in the Kazakh capital of Astana that led to the creation of four "de-escalation zones" which produced a drop in violence, though deadly air strikes and battles continue in some areas.

Western powers are concerned that Russia is seeking to take a leading role in the peace process and will carve out a settlement that will largely favor Assad.

But experts and officials have noted that Moscow cannot forge a solution alone and needs the U.N. to legitimize any peace deal.

"I think (the Russians) have some really strong cards, but I don't think they hold all the cards," the European diplomat said.

"That is why Geneva is such a significant, important process, because only Geneva has the legitimacy to bring together all of those constituent parts and only Geneva will unlock the significant international aid that is required to put Syria back on its feet", the diplomat said.

The Butcher is out. Next step International Court.

Yeah, the media consensus now is that Assad has lost and your "rebels" will take Damascus next week...

The "rebels" have no leverage, there is nothing to negotiate other than where to exile them.