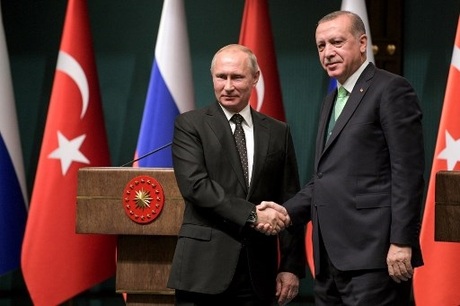 One year after the murder of Russia's ambassador to Turkey in Ankara, Russian-Turkish ties are at their strongest point for several years although numerous areas of tension remain.

The evening of December 19, 2016 ambassador Andrei Karlov, a veteran of Soviet and Russian diplomacy, was shot dead by an off-duty Turkish policeman while inaugurating a photo exhibition in Ankara.

There were fears the killing would again derail relations that had only been put back on track that summer with a reconciliation deal after the November 2015 shooting down by Turkey of a Russian war plane over the Syrian border.

Moscow conspicuously did not echo Ankara's assertions the murder was a plot carried out by the group of U.S.-based preacher Fethullah Gulen who stands accused of staging the 2016 failed coup.

But both President Recep Tayyip Erdogan and Russian counterpart Vladimir Putin were adamant ties would not suffer.

And the last year has seen intense diplomacy between the two sides over Syria. Erdogan and Putin, who in late 2015 were violently denouncing each other, have met no less than eight times in 2017.

The latest encounter was on December 11 when the Russian president flew into Ankara having met Syrian President Bashar al-Assad -- Turkey's foe throughout the nearly seven year Syrian conflict -- earlier that day.

Along with Tehran, Moscow and Ankara see themselves as a troika of guarantors setting out Syria's future, with Europe and the United States conspicuously absent.

Russian tourism to Turkey has picked up, Russia has resumed work on Turkey's first nuclear power plant and work on an undersea gas pipeline is proceeding apace.

Meanwhile, Ankara is nearing the purchase of two S-400 air defense systems from Moscow for a reported $2.5 billion in a move that has troubled its NATO allies.

But while cooperation appears to be thriving, there may be limits to the alliance between two post-imperial countries whose governments have fought for hegemony in the Black Sea region for centuries.

"The Russia-Turkish partnership is certainly in a better shape than a year ago, let alone than two years ago," Igor Delanoe, deputy head of the French-Russian analytical center Observo, told AFP.

"Nevertheless, it cannot be said that Moscow and Ankara are on the same page on what happens next," he added.

Delanoe said there are still "deep divergences" over the role of Syrian Kurdish militia who control much of Syria's north in a congress Russia plans to hold next year to determine key issues including elections and a new constitution.

Ankara regards the Syrian Kurdish Democratic Union Party (PYD) as a terror group, but it has cordial relations with Moscow and have cooperated on the ground in Syria.

And while the S-400 deal is a symbolic message to NATO, it has been shadowed by tough negotiations over technology transfer and financing.

Putin and Erdogan were set to sign an agreement at their Ankara talks but the deal was not ready. A table that had been set up for the signing was hurriedly moved away.

"The S-400 agreement is not a done deal," said Delanoe, adding he was highly doubtful Moscow would accept Turkish demands to have a production plant on its soil.

Kerim Has, of Moscow State University, said the relationship as a whole was being "orchestrated by Moscow" and was not an equal partnership.

He said Turkey was dependent on Russian energy as well as influence after being "out of the game" in Syria until their cooperation began.

"Turkish-Russian relations are on slippery and fragile ground," he said, describing the S-400 contract as "a long and thorny road".

Karlov was murdered by off-duty riot policeman Mevlut Mert Altintas, 22, who was himself killed shortly afterwards by Turkish police. Some commentators expressed regret he was not captured alive to give full explanations.

Erdogan said two days after the killing that there was "no need to make a secret" out of Altintas' links to the organization of Gulen. The Pennsylvania-based Gulen denies any role in the coup or the assassination.

Turkey has arrested five suspects in connection with the plot, alleging they have links to Gulen's group.

However no Russian official has ever publicly endorsed the version that the crime was plotted by Gulen's organization.

Karlov, who in a long career had notably served as Russian ambassador to Pyongyang, was posthumously decorated with the country’s top award Hero of Russia.