Hariri Says Resignation Crisis was 'Bitter', Dialogue is 'the Only Way' 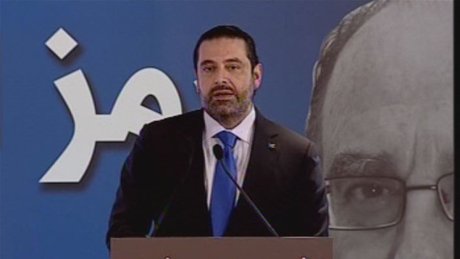 Prime Minister Saad Hariri on Wednesday described his November resignation ordeal as “one of the bitterest crises” in his political life, while stressing that dialogue is the only possible approach in Lebanon.

“Four years have passed since the martyrdom of the brother and the comrade of the difficult days, (slain ex-minister Mohammed Shatah), and each year I was sensing the extent of the emptiness he has left. But this year I increasingly felt his absence and how much I needed his wit, wisdom and firmness during one of the bitterest crises in my political life,” said Hariri at a rally marking Shatah's fourth assassination anniversary.

“Shatah fell on the same path of late PM Rafik Hariri. Together they walked the path of moderation and state-building and together they were martyred in defense of the state's role,” Hariri added.

“Today Mohammed is the symbol of dialogue and this country cannot live without dialogue,” the premier went on to say.

He added: “We can challenge each other, practice arrogance, yell at each other and fight each other, but in the end, the country would pay the price. Dialogue remains the only way no matter the political disputes.”

Emphasizing that he and certain political parties will not agree on a lot of issues, especially regional matters, Hariri asked: “Without dialogue, how would the situation in the country be?”

“We experienced the absence of dialogue prior to the Taef Accord but we ended up around the same table. The Taef Accord is doing very well because we will always defend this Constitution,” the premier added.

Hariri had shocked the Lebanese and the world on November 4 when he resigned during an unusual TV broadcast from Saudi Arabia, citing assassination threats and blasting the policies of Iran and Hizbullah in Lebanon and the region.

After a puzzling mini-odyssey that took him to France, Egypt and Cyprus, Hariri arrived back in Lebanon after around two weeks of absence and then announced the reversal of his resignation after he reached an agreement with the Hizbullah-led camp on distancing Lebanon from regional conflicts.

Many questions remain unanswered following the unprecedented scenario that saw Lebanon's prime minister resign in a foreign country suspected of keeping him under “house arrest” and return only after the apparent intervention of France.

And while Hariri and Riyadh seemed on a collision course with Hizbullah last month, an apparent behind-the-scenes deal has restored the status quo.

“Shatah fell on the same path of late PM Rafik Hariri. Together they walked the path of moderation and state-building and together they were martyred in defense of the state's role,” Hariri added.

and you are allied with the same terror group that killed both of them. Your sob story is not fooling anyone.

Sitting with the assassins of your Father and of many other great patriots....you call this "dialogue"???

He always sets new and higher standards in governance. Yes, justice is achieved through 'dialogue' with the assassins and killers.

Dialogue is the only way indeed, you want to try the same stunt as Hariri did in 2008?

Prime Minister Hariri knows that Saudi Arabia and Zionism is weak now in Lebanon, we don't live in 2005 anymore.

Now for the country to go forward, dialogue between all parties will be ensured.

You are the enemy of Lebanon. You are using time to steal more,to gain mire and to destroy more.
Go and have dialogue with Satan to whom you belong.

Dialog on behalf of Israel is what Kizballah's doctrine is.

Do you still tear up and get overwhelmed with emotions like I do when you remember sayidna al hussain?

“Four years have passed since the martyrdom of the brother and the comrade of the difficult days, (slain ex-minister Mohammed Shatah), and each year I was sensing the extent of the emptiness he has left."

Kindly, spare us the flowery words and insincere sentiments and tell us what have you and your governments done to arrest those who assassinated slain ex-minister Mohammed Shatah.

Currently watching a TV show called catfish , dunno why I had to come to Naharnet to read about lebanon and some of the fake people here such as mystick the couch potato keyboard warrior.

It's so freezing cold in NY... wish you all a good day in beirut im gona hit the bed now. Btwx the US customs gave me some troubles at JFK because of my leb background. The first time ever.

Mr. Hariri
The days of manipulating people are over. Your wake up call is just around the corner and it is called the elections.

One of these days Lebanon will be rid of all these business politicians....