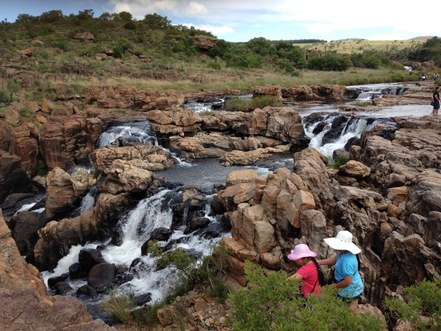 A woman in South Africa bit the penis of a man who raped her in front of her five-year-old child, police said Wednesday as they searched for the "severely injured" attacker.

The pregnant woman was hitch-hiking with her child in the northeastern province of Mpumalanga on Monday when two men gave her a lift, pointed a gun at her and drove their car into bushes.

"One of the men forcefully raped her at knifepoint in front of her child," Mpumalanga police said in a statement.

"During the process, the woman managed to bite the private part of the man who ran away," it added.

The police called for medical clinics in the area to contact them if they treated a man with "severely injured" private parts. The penis was not completely severed.

The woman, who was three months pregnant, was attacked outside the small town of White River.

More than 100 rapes are reported to police every day in South Africa, though the number of rapes is thought to be far higher.

Many alleged attackers are not prosecuted and the conviction rate in rape trials is less than 10 percent, according to independent studies.