Syria's Kurds: From the Margins to De Facto Autonomy 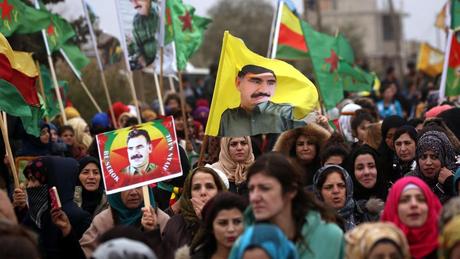 Syria's Kurds, whose Afrin enclave in the north of the country has been bombarded for the past week by Turkey, spent years carefully building a system of self-rule amid the chaos of war.

They have largely stayed neutral in the conflict raging in Syria since 2011 and successfully turned decades of marginalisation into partnerships with world powers.

- Decades of discrimination -Concentrated in the north, Kurds make up around 15 percent of Syria's population.

Most are Sunni Muslims, though there are some non-Muslim minorities and many Kurds consider themselves secular.

After a controversial census in 1962, they were stripped of their Syrian nationality and have since suffered marginalisation and oppression by the ruling Baath party.

- Neutrality, then autonomy -When Syria's conflict erupted in 2011, the Kurdish population generally sought to adopt a position of neutrality.

President Bashar al-Assad made conciliatory gestures towards the Kurds from the earliest days of the conflict, granting citizenship to 300,000 people after half a century of waiting.

In 2012, government forces withdrew from Kurdish-majority areas in the north and the east, paving the way for Kurds to consolidate control on the ground.

They have since established self-rule in many of these zones and have sought to prevent rebels and regime forces from entering them.

- 'Federal region' - In 2013, the Democratic Union Party (PYD) -- the political branch of the powerful People's Protection Units (YPG) -- announced the establishment of a semi-autonomous region.

And in 2016, Kurdish authorities announced the creation of a "federal region" made up of those semi-autonomous regions.

It would include three cantons: Afrin in Aleppo province, Jazira (Hasakeh province) and Euphrates (which includes parts of Aleppo and Raqqa provinces).

At the end of 2016, the Kurds gave themselves a "social contract" -- a Constitution for the "federal region".

And in 2017, inhabitants of the regions voted in "communal" elections to elect town councillors.

- Anti-jihadists -Kurdish fighters have proved to be the most effective anti-IS force in Syria and Washington's best ally in the fight against the group.

At the start of 2015, Kurdish forces supported by US-led coalition strikes ousted IS from Kobane on the Turkish border after more than four months of fighting.

In 2016, the Syrian Democratic Forces (SDF), an alliance of Kurdish fighters and Arabs, captured the city of Manbij from IS.

And in 2017, they overran IS' de facto Syrian capital, Raqqa.

- Turkish ire -At the start of 2018, the coalition announced it was working to create a 30,000-strong border security force in northern Syria, around half of whom would be retrained SDF fighters.

The alliance would be made up of Kurdish and Arab fighters.

But Ankara accuses the YPG of being the Syrian offshoot of the outlawed Kurdistan Workers' Party (PKK), which has waged a three-decade rebellion in Turkey's southeast.

On January 20, Turkey launched an air and ground operation against the YPG-held enclave of Afrin in northern Syria.

The local authority has called on the Syrian regime to intervene to prevent Turkish warplanes from entering the country's airspace and to protect Afrin.

"Anti-jihadists -Kurdish fighters have proved to be the most effective anti-IS force in Syria and Washington's best ally in the fight against the group." Naharnet quotes.

You seem to forget that the Axis of Resistance alongside Russia are the ones that beat ISIS, neither the Kurds or Americans did so.

If the Kurds are so important as you mention, then why does your beloved Washington not step in to save them from Erdogan?

Mystic as you may know politics makes for strange bed fellows. Today's enemy maybe tomorrows friend, Russia and the USA have and will continue to play with the world as they deem best fits their changing plans. This does not mean that they particularly love your Iran or hate it, however it does mean that they will buy and sell your party at will if it fits their plans. Do not assume for one moment that Russia is enamored with your party and that its prepared to place it ahead of its personal agenda but rather will take advantage of it when required. The USA is no different they ally themselves with the Kurds and others only to manipulate them as they see best fits. In reality for us in the middle east it has taught us a lesson that sadly is forgotten quickly as we too think were using them to gain our little victories. I would look at resolution coming from withen rather than outside.

Russia has nothing to do with Hezbollah, they followed their own interests when they aligned themselves with Syria and Iran.

Because ISIS and Nusra is filled up with Chechens and people from Dagestan, the Russians worst enemies.
The Russians played it smarter than the U.S did.