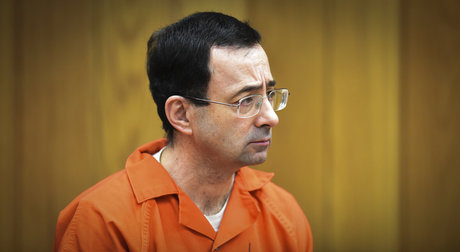 Larry Nassar, the former USA Gymnastics doctor who sexually abused girls and young women for decades under the guise of medical treatment, was sentenced Monday to an additional 40 to 125 years in prison.

Nassar already faced a lifetime behind bars for two prior sentences after pleading guilty to sexually assaulting women and girls in his role as a high-profile sports medicine doctor at USA Gymnastics and at a Michigan State University (MSU) clinic.

The latest sentence stems from abuse he committed at the Twistars gymnastics training center in Michigan, where victims said in court they were referred to Nassar for treatment and were molested.

"This now ends the criminal legal proceedings involving Larry Nassar. I realize that it does not end the emotional and physical suffering he has caused," Judge Janice Cunningham said in a Charlotte, Michigan courtroom after imposing the maximum sentence under a plea agreement.

The 54-year-old is accused by some 265 women -- including Olympians, gymnasts and collegiate athletes -- of sexually abusing them over a more than two-decade career.

His case has convulsed US amateur athletics and led to profound questions about how his abuse managed to go undetected for so long.

Over the past three weeks of court hearings, some 200 women, girls and victims' family members confronted Nassar and gave wrenching accounts of his abuse and its lasting damage.

They spoke of years of depression and post-traumatic stress disorder, suicide attempts and broken bodies that had not received proper care and suffered under chronic pain.

Many victims gave nearly identical accounts of Nassar's pattern of abuse: a star doctor who seemed to befriend them, only to suddenly abuse them during medical appointments -- often with parents in the room.

"Larry Nassar is a master of manipulation," Kaitlyn Basel, a dancer who was first abused by Nassar at the age of 12, told the court Friday.

"He trained us to believe that he was a saint that could help us, and that without him we could not get better."

Nassar addressed the court Monday in a brief statement lasting less than a minute, offering an apology similar to the one he gave at the January sentencing hearing.

"The words expressed by everyone that has spoken, including the parents, have impacted me to my innermost core," Nassar said.

"It's impossible to convey the depth and breadth of how sorry I am to each and every one involved."

The key question for many victims has been who knew of Nassar's abuse and who could have stopped him earlier.

"We have taken care of one perpetrator, we have not taken care of the systems that allowed him to flourish for 20 years," Rachael Denhollander, the first to publicly accuse Nassar, told a throng of news media at the courthouse following the sentencing.

With a stellar reputation as the doctor to Olympic champions, Nassar evaded scrutiny several times since the late 1990s by insisting his abuse was in fact cutting-edge treatment that was misunderstood by some patients.

"His lies worked," lead prosecutor Angela Povilaitis said in her closing statement. "Each time he got away, he was empowered to continue and perfect his abuse and his techniques even more."

Even after Nassar came under serious scrutiny, his abuse was not immediately stopped.

USA Gymnastics reported Nassar to the FBI in July 2015, but he continued to see patients at MSU until a newspaper exposed him in September 2016.

The New York Times reported that at least 40 more women and girls were molested during that time.

Victims have called for systemic changes at MSU and amateur athletics, and for others -- such as coaches and organizational leaders -- to be held accountable.

Several resignations have followed, and MSU, the gymnastics governing organization and the U.S. Olympic Committee all are facing investigations.