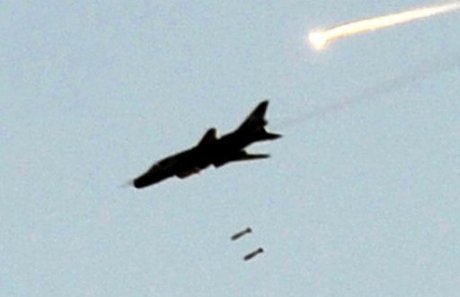 Syrian air defense systems intercepted an Israeli air attack on a military position near the capital Damascus on Wednesday, the army said.

"This morning, Israeli warplanes fired several missiles from Lebanese airspace on one of our military positions in the Damascus countryside," said an army statement carried by state media.

An AFP correspondent in Damascus heard loud blasts around 3:30 am (0130 GMT).

The Syrian Observatory for Human Rights, a Britain-based monitor of the war, said at least some Israeli missiles had hit military targets near Damascus.

Jamraya, which lies just over 10 kilometers (seven miles) northwest of Damascus, is home to several military positions and a branch of the Syrian Scientific Studies and Research Center (SSRC).

An Israeli air strike hit the facility in May 2013 and another hit an SSRC branch in western Syria in September.

Israel has carried out dozens of air strikes on the Syrian armed forces and their allies since the civil war broke out there in 2011.

It says it is aiming to stop advanced weapons deliveries to Lebanon's Hizbullah, with which Israel fought a month-long war in 2006.

lol that's one funny comment! indeed, they live in their own little fantasy world.

So how come the Syrians can intercept high velocity missiles but fail to take down a squadron of F15s which were designed 45 years ago? the answer is easy, it's all lies... they didn't intercept anything!

Remember according to Syrian media they have never lost a battle and like their allies Kizb have become accustomed to living the lie. There are three deaf and dumb Bedouins somewhere in the Syrian desert who probably believe this the rest are just foolish followers.