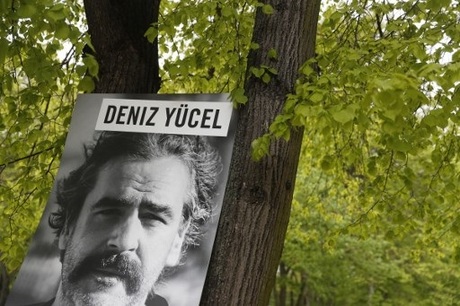 Turkey on Friday freed a German-Turkish journalist held for more than a year in jail without facing trial, in a surprise move which may help repair severely eroded ties between Ankara and Berlin.

Deniz Yucel, 44, the Turkey correspondent of Die Welt newspaper, had been held since February 14, 2017 on accusations of supporting terror groups.

In a fast-moving day of events, he was released after prosecutors finally unveiled an indictment detailing the charges against him and requesting that he be jailed for 18 years.

But critically, the court also ordered that he be allowed to go free after the issuing of the indictment, potentially drawing the curtain on the biggest bone of contention in a major crisis between the NATO allies.

However, German Foreign Minister Sigmar Gabriel said that the court-ordered release was "unconditional."

"We presume that he will be allowed to leave the country," he added.

An AFP journalist saw Yucel -- looking tired but happy -- return to his apartment in the Istanbul district of Besiktas.

Gabriel later said Yucel was heading to the airport. Leaving the country would allow him to be tried in absentia and thus not face any jail time even if convicted.

News of Yucel's release broke just as an Istanbul court jailed three prominent Turkish journalists for life on charges of links to the group blamed for the 2016 failed coup.

The incarceration of the German-Turkish correspondent has been the biggest stumbling block to rebuilding badly damaged ties between the governments of Chancellor Angela Merkel and President Recep Tayyip Erdogan.

Merkel said that she welcomed the release and thanked "all those" who had worked to free Yucel.

Adding a note of caution, she added: "I know there are other people, perhaps less well known, who are in prison in Turkey and we hope their legal proceedings will be resolved quickly."

News of Yucel's release broke just as an Istanbul court jailed three prominent Turkish journalists for life on charges of links to the group blamed for the 2016 failed coup.

EU Enlargement Commissioner Johannes Hahn said Yucel's news was "encouraging" but "many more such cases must follow so that EU-Turkey relations can really improve."

Germany, home to a three-million-strong ethnic Turkish minority, has strongly criticized Erdogan's rights record, especially after a mass crackdown in response to a failed coup against him in July 2016.

Also detained were a number of German citizens or dual nationals whom Berlin considered political hostages.

Politicians and commentators on Friday transformed the hashtag into a celebration of the news, with Justice Minister Heiko Maas tweeting: "The best news in a long time: Welcome to freedom!"

Merkel had on Thursday told Turkey's visiting Prime Minister Binali Yildirim that Yucel's detention stood in the way of efforts on both sides to improve "clouded" relations and marked a continuing "burden."

She reiterated German concerns about the rule of law in Turkey, where the authorities had suspended tens of thousands of people after the failed coup.

Yildirim also cautiously welcomed the release, saying "some of the issues causing some problems in Germany-Turkey relations in the past period seem to be resolved today."

"God willing it will be better," Yildirim said

Yucel gave himself up to police last year after initially taking refuge inside a German diplomatic compound in Istanbul when media reported an arrest warrant had been issued against him. He had been in custody ever since.

Relations have recently started to recover from their deep crisis after Turkey released several German citizens.

Gabriel had repeatedly discussed the Yucel case with his Turkish counterpart Mevlut Cavusoglu.

German media reported that he had two secret meetings on the issue this year with Erdogan -- one in Rome and another in Istanbul -- with the latter attended by former chancellor Gerhard Schroeder, a personal friend of Erdogan.