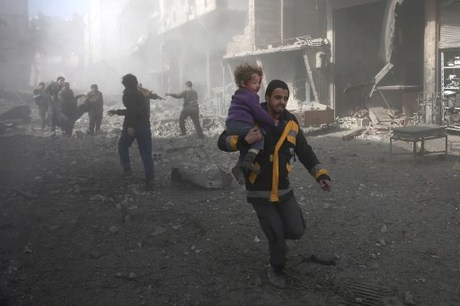 U.N. Secretary-General Antonio Guterres on Wednesday called for an immediate halt to fighting in Eastern Ghouta where a Syrian government bombing campaign has turned the rebel-held enclave into "hell on Earth" for civilians.

"My appeal to all those involved is for an immediate suspension of all war activities in Eastern Ghouta allowing for humanitarian aid to reach all those in need" and for medical evacuations, Guterres told the Security Council.

The U.N. chief said he was "deeply saddened by the terrible suffering" of civilians in Eastern Ghouta where he said 400,000 people "live in hell on Earth."

"This is a human tragedy that is unfolding in front of our eyes, and I don't think we can let things go on happening in this horrendous way," he added.

Guterres said he supported efforts at the Security Council to agree on a draft resolution demanding a 30-day ceasefire in Syria to allow for deliveries of humanitarian aid and medical evacuations.

Sweden and Kuwait presented the measure to the council on February 9 but negotiations have been tough-going, with Russia raising objections to the proposed truce, diplomats said.

"I fully support that effort, but I believe Eastern Ghouta cannot wait," Guterres told the council.

The negotiations have dragged on as Syrian forces backed by Russia have escalated a fierce offensive on Eastern Ghouta.

Close to 300 civilians have been killed since Sunday including 24 Syrians who died when government warplanes dropped barrel bombs on the town of Kfar Batna on Wednesday, according to the Syrian Observatory for Human Rights.

Swedish Ambassador Olof Skoog told reporters he hoped that a vote on the draft resolution demanding the ceasefire could take place "in the next few days," possibly as early as Thursday.

Asked whether there was a consensus on the draft text, Skoog said: "That, I don't know yet."

Russia has resorted to its veto power at the council to block resolutions targeting its Syrian ally.

The latest draft text circulated last week calls for the truce to go into effect 72 hours after the adoption of the measure and for aid deliveries and medical evacuations to begin 48 hours after that.