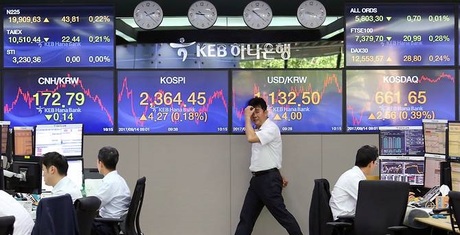 Equities have been pushing higher since the first week of February saw a plunge that wiped trillions off valuations worldwide, though analysts warn that with prices still high volatility could return.

The S&P 500 on Monday climbed above the level it touched before the sell-off, while the Dow and Nasdaq also climbed more than one percent.

But profit-taking sent other key markets into negative territory.

Shanghai slipped more than one percent, though Innes added that Xi Jinping's move to lift term limits on his presidency would be "a boon to regional economic sentiment as it guarantees continued market reforms and staying the course on the (Belt-and-Road) trade-and-infrastructure programme".

This week sees a number of key events, including the release of US economic growth and inflation data.

- Tied hands -But firstly new Fed chief Powell will speak before top congressional committees on Tuesday and Thursday, with his remarks being closely analysed for clues about monetary policy.

Nerves are still raw after the recent sell-off and his views on monetary policy will be closely watched, though many are tipping him to stick to predecessor Janet Yellen's course.

"The path of least resistance for him is to really stick to the script, which is to reiterate that there is a lot of underlying momentum in the economy, that gives them more confidence in their projections, but ultimately the path of interest rate increases is going to be gradual."

With eyes on Powell, the dollar is struggling against its main peers as well as other higher-risk currencies, despite the euro coming under pressure after the head of the European Central Bank suggested he would be patient in removing crisis era stimulus.

Mario Draghi said there remained some uncertainty in the eurozone's recovery, which could hold back inflation. The comments tempered long-running speculation the ECB will tighten policy as the region's economy improves.

"For now, Draghi is a steady hand on the tiller," said Greg McKenna, chief market strategist at AxiTrader.