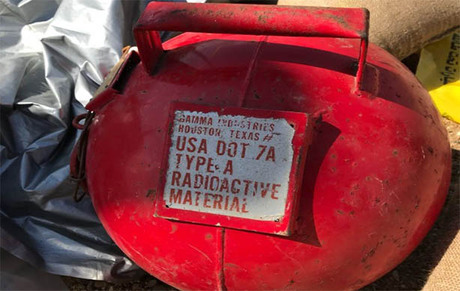 The Lebanese Atomic Energy Commission (LAEC) has ruled out any danger to the public from a metal cylinder containing a "radioactive substance" that was found on Ouzai’s beach.

The LAEC said none of the substance escaped from the object.

"Tests conducted in the field showed the radioactive substance was still isolated in the cylinder and did not cause any radioactive pollution in the area it was found," the LAEC said in a statement.

The head of the LAEC has said that the cylinder contains radioactive material usually used in oil and gas exploration operations.

The cylinder bore the inscription "USA DOT 7A TYPE A RADIOACTIVE MATERIAL".

It was transported by the LAEC and the Lebanese Army before being stored according to international safety standards, the organization said.

"Currently we do not have any information on the origin of this cylinder," said Environment Minister Tarek al-Khatib.

"I asked the prosecutor yesterday to open an investigation about this which will be conducted by the military police," he told AFP.

"If this container has come from the sea, we will have to make sure there are no other similar cylinders."

Lebanon has struggled with a waste crisis that saw mountains of garbage pile up on streets in and around the capital in 2015.

The country has more than 150 illegal dump sites where waste is burned, according to Human Rights Watch.

The waste crisis triggered mass protests, with many taking aim at politicians in a country that has suffered endemic corruption since the end of the 1975-1990 civil war.

This either comes from Israel or more likely Cyprus given the sea currents. They need to take it back.

Lebanon has been the dumping grounds way too long for many nations who have dumped their waste on its doorsteps. A reflection of how our leadership manages the country.

True, that. I remember there was a big scandal sometime in the '90s when they found shipping containers full of radioactive waste from Europe in our ports. This is a nothing burger by comparison.

A quick search for "USA DOT 7A TYPE A RADIOACTIVE MATERIAL" reveals that the cylinder is used to contain Cobalt-60, which is a non-fissile, radioactive isotope of Cobalt, used mainly in cancer treatment. Any hospital that provides radiotherapy cancer treatment would have plenty of the material as well. The "DOT" indication ("Department Of Transportation") implies that the radiotherapy has been performed outside of the USA by US-affiliated or US-sponsored doctors, as the DOT is responsible for securing the radioactive material and transporting it back to the US where it can be placed in decay yards (in Co-60's case, for 5.3 years, after which it ceases to be radioactive). There are plenty of such medical centres around the region, starting with AUH right here in Beirut.
In other words, no need to freak out people. Nobody was trying to kill us.
However, I do want the person(s) responsible for this canister washing up in Ouzai to be traced and charged with gross negligence.

Colbalt 60 is dangerous. Here one of its accidents. https://en.wikipedia.org/wiki/Samut_Prakan_radiation_accident
Such container already disappeared in the 80's being stoled at Beirut Airport (i guess before 84)

So is water if you over do it Blablabla but as Maxx explained its non Fissile so its not going to be placed on a Kizb Ali Akbar Saroukh to obliterate the world.