Historic Yemen Town Fights to Survive as War Closes in 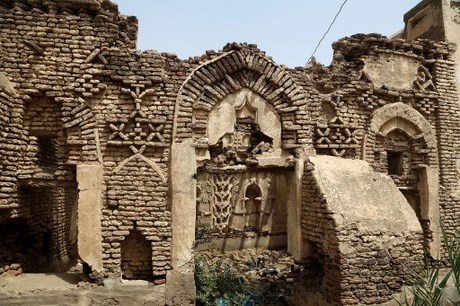 Once Yemen's capital and famed as an architectural marvel of early Islam, the town of Zabid is fighting to survive as a brutal war closes in on its fortified walls.

The sand-colored town overlooking the country's west coast was named a UNESCO World Heritage site in 1993 for its centuries-old urban planning and architecture, including the world's fifth oldest mosque.

Riven by neglect and poverty, it was placed on the UNESCO list of World Heritage in Danger seven years later.

Yemen's three-year war, which has killed nearly 10,000 people and pushed the country to the brink of famine, is now threatening the fate of Zabid.

So far the town has been spared in the battle between Yemen's Iran-backed Huthi rebels and a government allied with a military coalition, led by Saudi Arabia.

But a fight for nearby Hodeida, home to Yemen's most vital port, has raised fears the violence is closing in on Zabid.

Like other residents, he fears for both his family and his town, where homes built from baked bricks give the centuries-old skyline its trademark sandy hue against the bright blue Yemeni sky but offer little protection.

"Our homes are built of local mud," Ahmed told AFP, seated near one of the old wooden windows carved into the wall of his brick home.

"Another blow and the roof will cave in on us".

From the 13th to 15th centuries, Zabid was the capital of Yemen before being dethroned by Sanaa.

The town predates the foundation of Islam but is an architectural marvel of the faith: four gates surround the city, where a web of narrow cobblestone streets links a souk with quieter residential areas.

It also features the highest concentration of mosques in Yemen, one of the world's first Islamic universities and canals to supply water to residents.

Experts have warned  Zabid may not be able to withstand more blows, even if fighting remains confined to its outskirts.

"These are centuries-old buildings. They cannot bear shelling or even the vibrations of missiles," said Yemeni restoration specialist Hussein Abdulrahman.

"The world should be fighting to preserve this."

In Zabid, shops that resemble little castles are still open and traffic flows through the streets.

Also open is the Zabid Public Library, a tiny gem hidden in the basement of a old house, with 10 arched and engraved windows to allow daylight in.

Mukhtar Abdulsamad, head of the general authority for historic preservation in Zabid, fears one of the last pillars of his country's heritage may soon be demolished.

"We appeal to international organizations, and UNESCO, to prioritize the protection of Zabid," Abdulsamad said.

"This town belongs to the world and not to Yemen alone."

Residents and international organizations fear the Saudi-led coalition's warplanes may hit the town itself, as it is still under the control of the Huthi rebels.

The coalition did not immediately respond to a request for comment.

"The fighting in Hodeida governorate is at the gates of the historic city of Zabid, fanning fears for the fate of its cultural heritage," said Alexandre Faite, head of the International Committee of the Red Cross's delegation in Yemen.

Hodeida is the main conduit for aid into the nation of 28 million people, 70 percent of whom face starvation as poverty, violence and cholera stalk the country.

In 2014, the Huthi rebels seized the port in a takeover of territory that included the Yemeni capital.

The government has pushed to recapture Hodeida in recent months.

In November, the Saudi-led coalition imposed a total blockade on the Hodeida port, as well as the country's main international airport, in retaliation for missiles launched by the rebels towards Riyadh.

The blockade sparked harsh condemnation by the U.N. and has since been partially lifted.