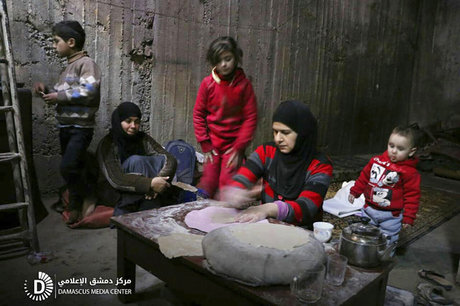 Syria's army unleashed daily air strikes on Eastern Ghouta outside Damascus on February 18 in a bid to root out Islamist rebels and jihadists but killing more than 700 civilians.

As the regime was reported to have retaken a third of the enclave Monday, a U.N. convoy entered in the first aid delivery since the start of the devastating assault two weeks ago.

Here is a summary of events:

- New round of rockets, raids -

The strikes continue on February 19 when 127 civilians are killed in the highest death toll over a single day there since 2013, when it was besieged by regime forces.

Six other hospitals are also hit in the bombardments over a 48-hour period, putting three out of service, according to the United Nations.

The Kremlin denies involvement in the air strikes as "groundless accusations."

The chaos deepens on February 22 as the Syrian regime rains rockets and bombs on the enclave, killing at least 19 people.

At the United Nations, key regime-backer Russia is pressing for a negotiated withdrawal of rebel fighters and their families, like the one that saw the government retake full control of Aleppo in December 2016.

On February 23 U.S. President Donald Trump slams the actions of the Syrian government and its Russian and Iranian backers.

"What those three countries have done to those people is a disgrace," he says.

In February 24 the U.N. Security Council finally gets unanimous backing for a 30-day ceasefire to allow for aid deliveries and medical evacuations.

But there are new air strikes the following day and the Britain-based Syrian Observatory for Human Rights monitor reports Syrian forces engaged in heavy fighting with rebels, with many dead.

On February 26 the regime carries out more bombings, in spite of the U.N.-agreed truce, killing at least 22 civilians.

Frustrated, the U.N. and European Union demand the immediate implementation of the ceasefire.

Moscow then announces President Vladimir Putin has ordered a daily five-hour "humanitarian pause" from February 27 and the opening of protected corridors to allow people to leave.

Hours after the truce is meant to come into effect, the United Nations says fighting continues, making relief operations impossible.

Not one of the battered region's residents board buses provided by the regime to leave. Trucks loaded with aid are blocked.

The Syrian regime again pounds the area on March 4, killing more than 30 civilians, as President Bashar al-Assad says his forces will continue their push.

"The majority (of people) in Eastern Ghouta want to escape the embrace of terrorism. The operation must continue," Assad tells journalists.

The U.N. announces that dozens of trucks of emergency relief have entered the enclave, the first aid delivery since the start of the assault.

The aid arrives after the Observatory says that regime troops have retaken a third of the enclave.