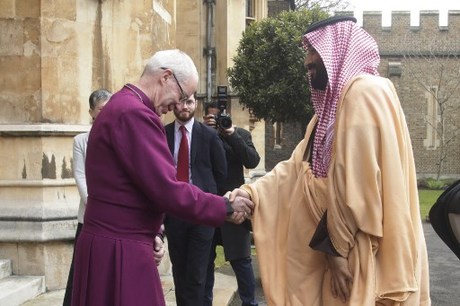 Saudi Crown Prince Mohammed bin Salman held a private meeting Thursday with Archbishop of Canterbury Justin Welby, where he made a "strong commitment" to interfaith dialogue, the archbishop's office said.

During the hour-long visit at Lambeth Palace, the pair discussed the crown prince's reform plans and Welby -- the head of the Anglican church -- expressed his concerns about the treatment of Christians in Saudi Arabia.

"The Crown Prince made a strong commitment to promote the flourishing of those of different faith traditions, and to interfaith dialogue within the Kingdom and beyond," the archbishop's office said in a statement.

"The archbishop shared his concern about limits placed on Christian worship in the Kingdom of Saudi Arabia, and highlighted the importance for leaders of all faiths to support freedom of religion or belief, drawing on the experience of the UK."

Prince Mohammed is on a three-day visit to Britain, which began with a lunch with Queen Elizabeth II on Wednesday, and will see him hold the second of two meetings with Prime Minister Theresa May later Thursday.

It follows a trip to Egypt earlier in the week, when Prince Mohammed met Coptic Pope Tawadros II in Cairo.

In what his office described as a "cordial and honest conversation", the archbishop also voiced his concern over the Saudi-led military action in Yemen, which has been the cause of protests during the crown prince's British visit.

"The archbishop voiced his distress at the humanitarian crisis in Yemen, and asked that all that is possible be done to alleviate the suffering of civilian populations and to seek an end to the conflict," the statement said.

The men viewed a selection of early texts from the Christian, Muslim and Jewish faiths during their meeting.