The Flu Vaccine: A High-Stakes Gamble 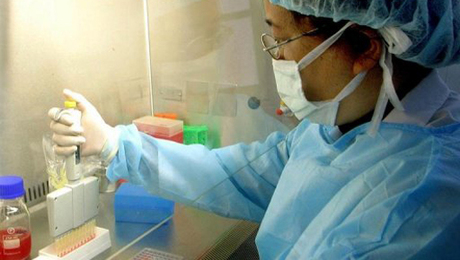 It is a high-stakes gamble with thousands of human lives on the line.

Yet twice a year, every year, the U.N.'s World Health Organization (WHO) bets on the flu -- which virus types are likely to dominate in the coming season? On this basis, a vaccine is prepared months in advance.

"We cannot say for sure which virus will be circulating," Wenqing Zhang, head of the WHO's global influenza program, told AFP.

"What we're doing is based on the best possible surveillance information and analysis, and basically to bet, or to project, what viruses will likely be circulating."

The flu virus is constantly changing its outer coat to avoid detection by the human body's immune system. Each subtype, however slightly altered, requires a targeted vaccine.

Every year, the WHO recommends a cocktail covering three or four bases at once -- usually two subtypes of the Influenzavirus A species, and two types of Influenzavirus B.

The closer the mix mimics the viruses that end up being in circulation, the better it will be at protecting people from infection.

Influenzavirus A, which also circulates in birds and can move between species, is responsible for most flu infections and causes the deadliest pandemics -- including the 1918-19 Spanish Flu that killed as many as 100 million people.

Influenzavirus B is found almost exclusively in humans, and causes less severe sickness.

The choice of vaccine mix relies on year-round work by the WHO's Global Influenza Surveillance and Response System, created more than 50 years ago.

Data is collected from 143 national influenza centers in 114 countries, which report on virus types doing the rounds, based on throat and nose swabs of patients.

Two different vaccines are proposed -- one for the northern hemisphere winter, one for the south.

The chosen viruses are then grown in chicken eggs, an age-old cultivation method which requires months to produce the required amount of vaccine.

"They are mixed, like a blended wine," Vincent Enouf of France's national influenza center said of the yearly vaccine.

The recipe for the northern hemisphere's 2018-19 winter was announced by the WHO on February 22.

It will include a strain of Influenzavirus A subtype H1N1 identified in Michigan in 2015, a strain of subtype H3N2 from Singapore in 2016, as well as a B type from Colorado in 2017, and another from Phuket in 2013.

The recipe for the southern hemisphere's 2019 winter season will be announced in September.

Do they get it right? It depends.

The 2017-18 northern hemisphere vaccine, said Zhang, has had mixed results.

For the B types, vaccine efficacy ranged between 20- and 70 percent, depending on the country.

The WHO recommends annual vaccination for pregnant women, small children, people older than 65, individuals with chronic medical conditions, and people who live or work with people in these categories.

But vaccination is not only about protecting individuals, it also creates "herd immunity".

The more people are shielded, the smaller the odds of an unvaccinated person coming into contact with an infected person, thus limiting virus spread.

In February, the WHO expressed concern about a decline in flu vaccination in Europe.