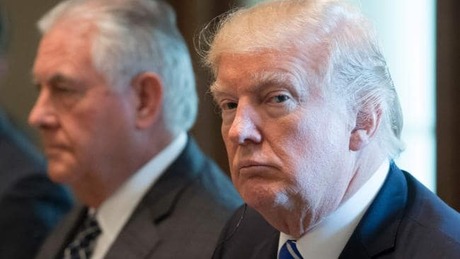 Donald Trump on Tuesday sacked his top diplomat Rex Tillerson and named current CIA chief Mike Pompeo to succeed him, ending a rocky tenure by the Texas oilman who had frequently been at odds with the mercurial U.S. president.

A senior White House official said Trump wanted to reshuffle his team with a view to launching talks with North Korea, following last week's spectacular announcement that he plans to meet Kim Jong Un by the end of May.

While Trump thanked Tillerson "for his service," he was sparing in his praise of the 65-year-old former Exxon chief, long rumored to be on the way out.

Before leaving on a trip to California, Trump spoke openly of their differences -- singling out the Iran nuclear deal -- as he explained the rationale for the latest departure from his chaotic White House.

"We got along actually quite well but we disagreed on things," Trump told reporters. "When you look at the Iran deal, I thought it was terrible, he thought it was okay."

"I wish Rex a lot of good things," the president added. "I think Rex will be much happier now."

The outgoing secretary of state, who returned overnight from a trip to Africa, did not address reports he only learned of his sacking when Trump tweeted the decision, saying only he had since spoken to the president.

In his farewell remarks Tuesday, he said Washington must do more to respond to Russia's "troubling behavior" -- one day after slamming Moscow for its alleged involvement in an attempted assassination using a nerve agent in Britain.

Tillerson will pass authority at midnight to Deputy Secretary John Sullivan, remaining at the department for handover purposes until March 31.

In announcing the reshuffle, Trump lavished praise on Pompeo, a former U.S. army officer and congressman who led the CIA for nearly 14 months, calling him "the right person for the job at this critical juncture."

"He will continue our program of restoring America's standing in the world, strengthening our alliances, confronting our adversaries, and seeking the denuclearization of the Korean Peninsula," Trump added.

But Democrats quickly pounced on the news.

"There's a pattern and practice to dismiss anyone with whom this president has a policy difference, and that appears to be the case with Secretary Tillerson," Senator Dianne Feinstein said.

To succeed Pompeo at the Central Intelligence Agency, Trump nominated Gina Haspel, a controversial career intelligence officer who is the first woman tapped for the post.

Haspel has been reported to have overseen a CIA "black site" in Thailand where Al-Qaeda suspect Abu Zubaydah was waterboarded after the 9/11 attacks.

Both Pompeo and Haspel require Senate confirmation to assume their new posts. A hearing for Pompeo is expected in April.

Adding to the day's drama at the State Department, Steve Goldstein, the undersecretary for public affairs and public diplomacy, was also shown the door after issuing a statement supportive of Tillerson.

Goldstein wrote that the secretary "had every intention of remaining because of the tangible progress made on critical national security issues," indicating he was caught off guard by Trump's move.

Within hours, Goldstein himself was fired.

Tillerson's sacking caps a tumultuous tenure at the State Department.

He was repeatedly forced to deny he had fallen out with Trump -- vowing to remain in post despite a sensational report that he once dubbed the president a "moron."

A respected businessman, his tenure drew scorn from Trump's opponents and the Washington policy elite.

During his time in the job, he was faced with an extraordinary array of foreign policy challenges -- from North Korean nuclear threats, to Russian intervention in Ukraine, Syria and Western elections, to attacks on US diplomats in Cuba.

But his efforts were often overshadowed by Trump's decidedly un-diplomatic style and streams of taunting tweets that have stirred international tensions.

Tillerson was thousands of miles away in Africa when Trump made the snap decision to meet Kim, suspending his schedule on grounds he was "unwell" before cutting short his trip.

In a cruel twist of fate, one of Trump's most public clashes with Tillerson came when the president accused his top diplomat of "wasting his time" pursuing contacts with North Korea.

But in his farewell comments, Tillerson talked up his achievements in the standoff -- suggesting the prospect of talks with Kim was made possible by the hard work of his State Department and allies.

The pressure campaign on Pyongyang "exceeded the expectations of almost everyone," Tillerson said, noting it was he who had declared on his first trip to Asia as secretary that the "era of strategic patience is over."