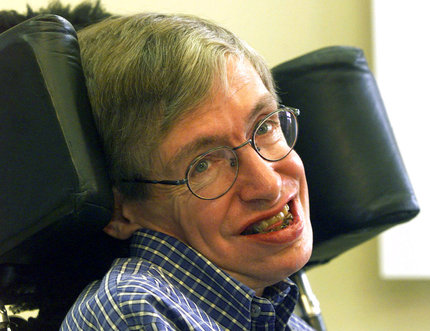 Very few people may have read and understood "A Brief History of Time", but the physicist Stephen Hawking carved himself out a place in pop culture equaled only by Albert Einstein.

While the brilliant mind behind the theory of relativity was instantly recognizable by Einstein's unruly "mad scientist" hair, Hawking's wheelchair and his synthesized voice made him every bit as iconic.

Both knew how to play to the gallery, and that the key to scientific evangelism was not to take yourself too seriously -- in public.

Einstein famously stuck out his tongue out for a picture in 1951 and Hawking never passed up a chance to show his rapier wit.

Within months of his 1988 bestseller -- dubbed "the greatest unread book in history" -- entering the Guinness Book of Records, the British cosmologist had became a star of the television chat show circuit and a pop cultural fixture.

He appeared as himself in everything from "Star Trek: The Next Generation" -- playing poker with a hologram of Einstein -- to "The Simpsons" where he conceded that Homer's "theory of a donut-shaped universe is intriguing".

In fact, he appeared five times in the cartoon series as "the world's smartest man", and became such a running gag that he had his own Simpsons figurine.

In his 1999 debut, "They Saved Lisa's Brain", he even started a brawl by punching Principal Skinner.

He was usually called on to deliver pearls of gnomic self-deprecating wisdom such as: "Sometimes even the smartest of us can be the most childish. But not me, never..."

The Simpsons' creator Matt Groening also used Hawking's severed head as a recurring trope in his sci-fi series "Futurama". The scientist was a regular too on another U.S. show, "The Big Bang Theory".

Pink Floyd's David Gilmour sampled his voice from a 1994 British telephone ad for his song, "Keep Talking", after Hawking channeled "E.T." to declare: "Mankind's greatest achievements have come about by talking and its greatest failures by not talking. It doesn't have to be like this."

Hawking's colleague at Cambridge University, the Astronomer Royal Professor Lord Martin Rees, said the key to his appeal was that his brilliant brain had been imprisoned in a wheelchair and that he had been robbed of his own voice.

"The concept of an imprisoned mind roaming the cosmos plainly grabbed people's imagination" and made him a cult figure, Lord Rees said in an appreciation of his friend, released Wednesday.

"If he had achieved equal distinction in (say) genetics rather than cosmology, his triumph of intellect against adversity probably wouldn't have achieved the same resonance with a worldwide public," he added.

But for French science writer and YouTube star Bruce Benamran, Hawking was a kind of postmodern superhero.

"He was clearly handicapped by his illness but at the same time he was kind of superhuman.

"He seemed to live in a kind of energy that was almost superhuman even as he was imprisoned in his wheelchair and obliged to talk through an artificial interface, which made him even more recognizable," he added.

Despite the black hole of a body wracked by amyotrophic lateral sclerosis, Hawking was able to fill the Albert Hall in London and other huge venues across the world and hold audiences spellbound with his ideas.

Hawking's personal life also became public property through the success of "The Theory of Everything", which saw actor Eddie Redmayne win an Oscar for portraying the scientist.

Based on the book by his first wife, Jane, Lord Rees said the film "conveyed with sensitivity how the need for support (first from a succession of students, but later requiring a team of nurses), strained his marriage to breaking point, especially when augmented by the pressure of his growing celebrity."

Hawking later married one of those nurses, Elaine Mason, whose former husband had designed Hawking's speech synthesizer, although the relationship did not last either.

In later life, he wrote a series of much-praised books for children with his daughter, Lucy.

While more than 10 million copies of "A Brief History of Time" were sold, Lord Rees said "probably more readers got to the end" of his other books which explained his ideas, such as "Our Universe in a Nutshell" and "The Grand Design".

Benamran, however, said his gift for explaining the most complex concepts was the key to his stardom.

"He was someone who could explain simply and clearly the most difficult subjects without loading them with scientific baggage," he said.