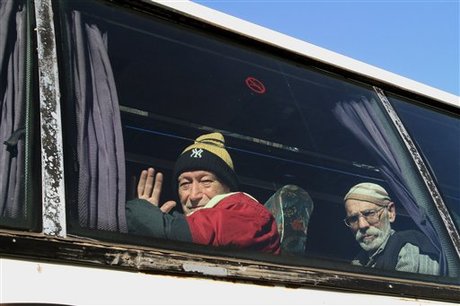 The evacuation of hundreds of rebels and their families from Harasta, a bombed-out town in Syria's Eastern Ghouta, follows a string of similar operations in the seven-year war.

The regime is pushing "reconciliation" deals -- the evacuation of fighters, generally towards the northwestern province of Idlib -- in exchange for lifting bombardments and sieges.

Amnesty International, in a November 2017 report entitled "We Leave or We Die", labeled such forced displacements crimes against humanity.

Here are some of the major evacuations:

In May 2014, rebels leave their fiefdom in the Old City of Homs, previously known as the "capital of the revolution", after a two-year siege.

Bombardments and fighting have devastated the city's historic quarters.

This is the first regime-opposition deal to result in a rebel retreat since the war broke out in 2011.

Between March and May 2017, thousands of rebels and civilians leave Waer, the last rebel-held neighborhood of Homs, allowing regime forces to fully retake control of Syria's third-largest city.

In August 2016 the last rebels evacuate their ex-stronghold Daraya, a town in Damascus province, following a deal with the regime after a brutal four-year government siege and incessant bombardment.

The rebels and their families are taken to Idlib and the Syrian army retakes control of Daraya.

In September the army evacuates some 300 Daraya inhabitants from neighboring rebel-held Moadimayet al-Sham, where they had taken refuge three years earlier.

U.N. Special Envoy for Syria, Staffan de Mistura, criticizes the "strategy" of forced displacement of the population and warns "after Daraya we may have other Darayas."

Following a suffocating siege and a blistering offensive with barrel bombs, rockets and shells, the Syrian army in December 2016 declares it is in full control of the country's second city, Aleppo.

Thousands of rebels and civilians are evacuated under a deal sponsored by Iran, Russia and Turkey.

In January 2017 the army recaptures Wadi Barada, a flashpoint area that supplies water to Damascus, after rebels agree to withdraw in exchange for an end to a suffocating siege.

The regime, backed by Lebanon's Hizbullah, had been trying to retake the area, just northwest of Damascus, since December 20, 2016.

The deal allows some 700 rebels and 1,400 civilians to leave Wadi Barada for Idlib province.

This multiple evacuation involves Fuaa and Kafraya, two Shiite areas in Idlib province that are surrounded by rebels. Meanwhile residents leave rebel-held Zabadani and Madaya, besieged by regime troops, which now move in to take control.

In May 2017, the regime retakes the rebel-held areas Barzeh, Qabun and Tishrin in Damascus. Several thousand civilians and fighters leave the capital, headed for jihadist-held Idlib province.