20 Years on, Kazakhs Struggle to Warm to Chilly New Capital 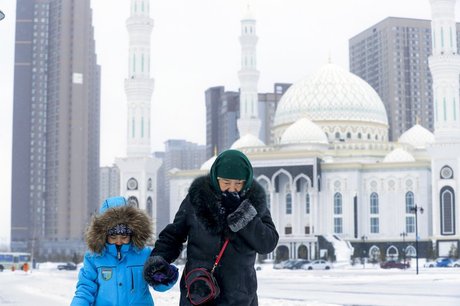 For Dina, a hairless Sphynx living in a newly-opened cat cafe in Kazakhstan's capital Astana, this winter was a difficult one to bear.

Temperatures in the steppe city of more than one million people reached minus 40 degrees Celsius (minus 40 degrees Fahrenheit) as Central Asia experienced its coldest winter in a decade, testing heating systems across the region.

During this time Dina took to sitting near the radiators of the Miki Piki cafe, which opened in 2017 and houses cats of more than a dozen different breeds.

"You have to be ever so careful with them," said cafe owner Aigul Kurmanaliyeva of the hairless Canadian Sphynx breed.

"They often need to wear clothes outside. They are very prone to illness," she told AFP.

Astana, the government's showpiece project on the Ishim river in northern Kazakhstan, took over as the country's capital 20 years ago.

But many of its residents compare Astana unfavorably with the former capital Almaty, a city of 1.5 million people that lies 1,000 kilometers (600 miles) further south and where temperatures are notably warmer.

"The beginning of the long-awaited spring is felt!" joked a popular local blogger, Rinat Balgabayev.

"In Almaty, the apricot trees blossomed. In Astana, citizens put on their festive colored leg warmers!" he said on Facebook recently.

Despite a pantheon of lavish, futuristic architecture, many people who were forced to move to Astana for work or family reasons find the city an uncomfortable fit.

Adil Nurmakov, a former resident of Almaty who moved to Astana for his wife's job last year, said life in the city can be a "shock", especially for foreigners and ex-residents of the cosmopolitan former capital.

"The way the city is planned means that citizens principally live in isolation, traveling by car from home to work and back again," he told AFP.

"There are few public spaces for people to congregate."

Such criticism has been leveled against other planned capitals, notably Brazil's Brasilia, but Astana's harsh climate during the winter months presents an additional challenge.

"For a large part of the year, public life in the city practically freezes over," complained Nurmakov.

Authorities generally cite Almaty's location in a seismologically active region as the reason for moving the capital north, as well as the opportunity to break with Soviet history.

Many observers however argued the decision was made to strengthen control over a part of the country with strong cultural and political affiliations to Kazakhstan's former master Russia.

Kazakhstan's government is sensitive to any criticism of the capital and will celebrate the 20th anniversary of the switch from Almaty on July 6, which is a national holiday called Astana Day.

The city now called Astana officially became the capital in December 1997 but the summer holiday was designed to coincide with the birthday of Kazakhstan's long-ruling 77-year-old President Nursultan Nazarbayev.

At the beginning of the year the country's ambassador to Britain, Erlan Idrissov, wrote a prickly letter to the Financial Times newspaper, denouncing an article that had referred to Astana as a "bizarre" and "hastily built" vanity project.

Kazakh nationals  were "immensely proud of this extraordinary achievement, led by President Nursultan Nazarbayev", he wrote in a letter published by the newspaper.

One long-standing criticism of Astana that has faded over time is that there is nothing interesting to do in the city.

Recent times have seen a subtle shift in the cultural balance of power between the current and former capitals, mainly at the instigation of the state, which has invested heavily in the arts and moved the national ballet troupe up north.

Astana has even acquired craft beer bars -- in another sign that the nightlife is growing more diverse.

Symbat Karintayev, the co-owner of a bar in the city's unpretentious old town called "The Hop", admitted he "took a risk" opening up.

The fashion for experimental ales arrived in Kazakhstan only very recently by way of Russia, he said, with Almaty taking to the trend more quickly than the capital.

"Craft beer is a new experience for the residents of Astana, but little by little these kinds of scenes are developing," Karintayev told AFP.

Back at the Miki Piki cat cafe -- whose opening added diversity to the leisure scene in a city that is already home to malls and gastro-pubs -- the owner said the idea came from a trip to South Korea known for its animal cafes.

"We knew there wasn't anything like that here," said Kurmanaliyeva.