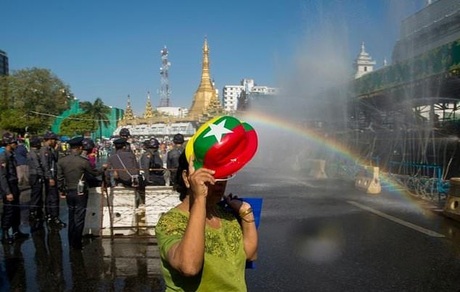 The thuds of party music and splash-happy water fights marked the start of celebrations leading up to the Buddhist New Year in Myanmar on Friday, a time of high spirits and revelry.

The colourful Thingyan festival lasts for four days from April 13 to 16, with the New Year arriving a day later.

Called Songkran in Thailand and Laos, the event is particularly frenzied in Myanmar, where major cities like Yangon are virtually shut down and it is difficult to walk outside without getting blasted with water.

In additional to traditional ceremonies, the festival takes the form of a country-wide party, with ear-splitting music and concerts, street food and endless water fights.

Partygoers take to pandals, or stages, to shower others dancing below with water. It is not for the faint-hearted, nor the dry-clothed.

Cars on the street keep their windows rolled up and taxi drivers cover their seats in plastic.

The raucous four days are also watched closely by the authorities, who issue frequent warnings about improper behaviour.

In a notice published in state media Friday, the Myanmar police force published a 13-point bulletin urging those taking part to avoid drinking too much, swimming or showering in lakes and creeks, donning clothing inappropriate to local culture, and "excessively teasing other people."