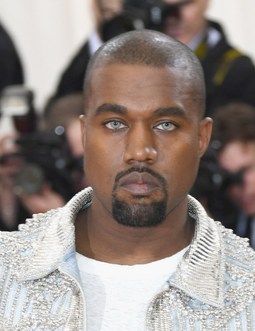 Since re-emerging last month from a yearlong absence, Kanye West has sparked outrage by throwing his lot with Donald Trump and calling slavery a choice. Yet the rapper has succeeded spectacularly in one key goal -- staying at the center of attention.

If West's newfound politics have baffled some longtime fans, the 40-year-old has clear stylistic affinities with Trump -- a bombastic round-the-clock presence on Twitter, with musings that appear to be stream-of-consciousness but manage to commandeer each news cycle.

A self-described Renaissance man with interests in music, fashion and politics who has unironically compared himself to Michelangelo, West had long been given a pass by the entertainment world for his rowdier tendencies such as disrupting award ceremonies as few dispute his talents.

Since breaking through in 2004 with "The College Dropout," West has produced lavish hip-hop albums that blend in soul and electroclash. He is tied with Jay-Z as the rapper who has earned the most Grammy Awards with 11.

But whereas West's early work explored his insecurities, the Chicago native has come to epitomize the Los Angeles celebrity lifestyle and in 2014 married reality television star Kim Kardashian, with whom he has three children.

After the chaotic release of his last album "The Life of Pablo," West suffered a mental breakdown and cut short his tour. He reappeared in public in December 2016 when he suddenly walked into Trump Tower in New York to meet the president-elect.

Returning last month to Twitter -- where he also announced two upcoming albums and promoted a shoe line -- West revealed that he feels "love" for Trump and sported one of his "Make America Great Again" caps.

But the rapper said he admired the real estate mogul's audacity to run -- and West himself has indicated, with an unclear level of seriousness, that he plans to seek the White House in 2024.

"When I see an outsider infiltrate, I connect with that," West told radio host Charlamagne tha God, adding that he was upset Obama invited other rappers to the White House.

But West made bigger headlines during a free-wheeling appearance at TMZ Live, part of the Hollywood gossip site.

His flippant remarks on America's original sin drew a quick and harsh reaction on social media and West was taken to task live in the newsroom of TMZ.

In another Trumpian touch, West later took to Twitter to criticize media coverage of his remarks, saying he meant "we can't be mentally imprisoned for another 400 years."

- No stigma to mental illness -

Jeffrey Q. McCunes, an associate professor of African American studies at Washington University in St. Louis who is writing a book on West, called the rapper's remarks a "hiccup" but said he clearly was speaking of "mental slavery."

"Unless Kanye chooses to have much more staged interview moments, we have to ignore some of the stupidity while paying attention to the moments of genius," McCunes said.

West also for the first time explained his hospitalization. He said he had been suffering stress for factors that included low airplay for "The Life of Pablo" and the armed robbery of his wife in her Paris hotel room.

Calling his hospitalization a "breakdown -- or breakthrough," West said his experience was "incredible" and that he wanted to draw awareness to mental health issues.

"Best believe, I'm going to take the stigma off the word 'crazy.'"