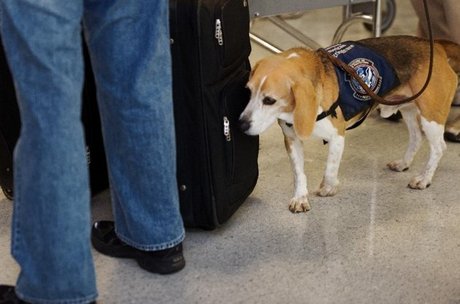 A Czech national was nabbed in Argentina for trying to board a transatlantic flight with 247 live animals including poisonous snakes and endangered reptiles packed in a bulging suitcase, reports said Monday.

The man identified as Karel Abelovsky, 51, was caught while trying to board a flight for Madrid when shocked baggage X-ray technicians and staff at the Iberia Airlines desk at Ezeiza Airport in greater Buenos Aires noticed "organic substances moving inside," local media reported.

When they opened the bag, they found more than 200 reptiles and mollusks, among them nine species of poisonous snakes including South American pitvipers, packed in clear plastic containers.

There were also 15 venomous vipers, including two yararas -- which can measure up to 1.50 meters (five feet) -- and several young boas.

Some of the animals were reported to be extremely rare and protected by the Convention on International Trade in Endangered Species.

Two of the animals were found dead and most of the others could have suffered the same fate due to a lack of oxygen if the suitcase had been placed in the plane's cargo area.

The discovery was made on December 7 but only recently came to light. A judge has charged Abelovsky with attempted smuggling, and he faces up to 10 years in prison if convicted.

Researchers suspect that an exotic species smuggling ring was behind the trafficking attempt.