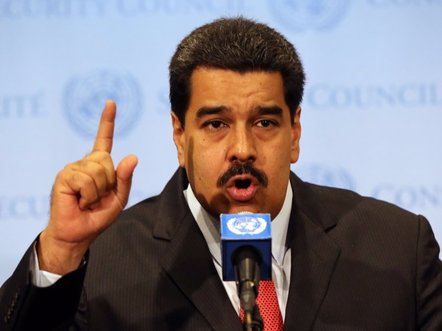 Here is a look over major events in the turbulent presidency of Venezuela's Nicolas Maduro, in power since 2013 and vying for re-election on Sunday.

- Takes over from Chavez -In March 2013 Hugo Chavez -- Venezuela's leader since 1999 and initiator of its socialist-inspired "Bolivarian revolution" -- dies of cancer.

The next month Maduro, his vice president and appointed successor, becomes president with a narrow win of 50.62 percent of votes in a disputed election.

Parliament grants special powers in November that allow Maduro to govern by decree for a year in order to fight inflation and shortages.

Opposition leader Leopoldo Lopez is arrested on charges of inciting the violence. He will be freed from jail in 2017 and put under house arrest.

In March three generals are arrested, accused of plotting a coup.

- Crackdown -In February 2015 the mayor of Caracas, Antonio Ledezma, is arrested and jailed over allegations of plotting to overthrow Maduro. He later flees to Spain.

In December, the price of oil plummets to its lowest level in seven years, leading to major food and medicine shortages.

The same month the opposition takes control of the National Assembly in a landslide victory.

In March 2016, the opposition launches a failed bid for a recall referendum that would remove Maduro before the end of his term.

In September, hundreds of thousands rally in Caracas in support.

- New assembly created -In March 2017 the Supreme Court, considered close to Maduro, assumes the powers of the opposition-controlled National Assembly, drawing cries of a pro-Maduro "coup" and turn to authoritarianism.

It reverses its decision in April, following criticism and international pressure. A new wave of protests begins that lasts four months and leaves 125 dead.

In May, Maduro launches moves to create a Constituent Assembly tasked with rewriting the constitution. The opposition charges the new body, which will supersede the National Assembly, is a ploy to cling to power and will be packed with Maduro loyalists.

Elections for the Constituent Assembly are held in July, boycotted by the opposition and marked by massive protests in which 10 people die.

Maduro claims victory but the results are disputed.

- Isolation, default -As Ortega's firing is announced, countries in the South American trading bloc, Mercosur, announce the indefinite suspension of Venezuela for "rupture of the democratic order."

The United Nations condemns the "excessive use of force" and Washington imposes new sanctions.

- Bid for re-election -In January 2018, the Constituent Assembly says a presidential election, originally scheduled for December, must be held before April 30.

It is announced Maduro will run, catching a divided and weakened opposition off-guard.

In February, the date for the poll is set for April 22 but it is later again delayed to May 20.