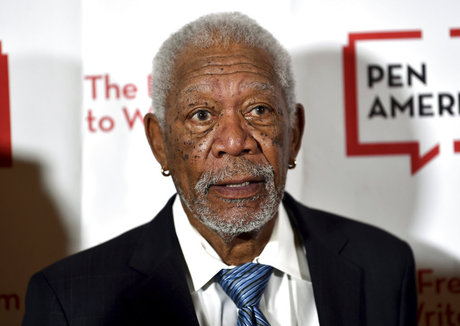 Octogenarian Oscar-winner Morgan Freeman apologized Thursday after a report of multiple sexual harassment accusations, making the actor the latest high-profile figure to face allegations of misconduct in the #MeToo era.

Sixteen people -- eight of whom say they were victims -- described to CNN a range of troubling behavior by Freeman on production sets or promotional tours.

The downfall of Hollywood mogul Harvey Weinstein last October triggered a U.S. reckoning over sexual harassment and abuse that has toppled a litany of powerful men across a variety of sectors including entertainment, politics and media.

The actor, who turns 81 next week, issued a quick apology after the news network published its report.

"Anyone who knows me or has worked with me knows I am not someone who would intentionally offend or knowingly make anyone feel uneasy," Freeman said in a statement.

"I apologize to anyone who felt uncomfortable or disrespected -- that was never my intent."

CNN quoted a young production assistant who said Freeman harassed her over a period of months in the summer of 2015 while she was working on his bank heist comedy "Going in Style."

She accused Freeman of touching her repeatedly, resting his hand on her lower back or rubbing it without permission, and frequently making comments about her appearance.

The woman said Freeman continually tried to lift her skirt and kept asking if she was wearing underwear.

Actor Alan Arkin, one of Freeman's co-stars in the film, "made a comment telling him to stop. Morgan got freaked out and didn't know what to say," the woman said.

A senior member of the production staff on "Now You See Me" (2013) -- another bank heist film, this time featuring a team of illusionist thieves -- also said Freeman had acted inappropriately with her and her assistants.

Freeman is also accused of staring at women's breasts, asking a woman how she felt about sexual harassment and asking women to twirl for him.

He won the best supporting actor Oscar in 2005 for boxing drama "Million Dollar Baby" and was nominated four other times for Academy Awards.

His other major films include "The Shawshank Redemption," "Se7en," and "Driving Miss Daisy," as well as several "Batman" movies.

With his deeply resonant voice, Freeman also did the voiceover for an award-winning documentary, "March of the Penguins."

Weinstein, whose case triggered a greater willingness among victims to speak out against abuse, has been accused by more than 100 women of impropriety going back 40 years and ranging from sexual harassment to assault and rape.

He is being investigated by British and US police, but has not been charged with any crime. He denies having non-consensual sex and is reportedly in treatment for sex addiction.

Other Hollywood figures who have been accused of sexual misconduct include actors Kevin Spacey and Dustin Hoffman, and director/producer Brett Ratner.