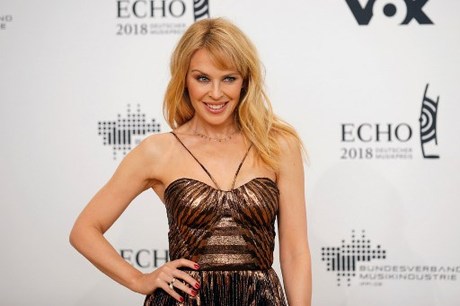 The pint-sized Aussie superstar celebrates her 50th birthday on Monday, another milestone for the singer who is one of the few celebrities known simply by their first name.

To mark the occasion Kylie has said she is planning "an extravaganza" with friends in London, where she is based -- and if her litany of hits including "I Should Be So Lucky" and "Can't Get You Out Of My Head" is anything to go by, she will have no trouble getting the party started.

Born in Melbourne on May 28, 1968, Kylie has defied critics who once wrote her off as a "singing budgie" to establish herself as one of Australia's biggest cultural exports and an international sex symbol.

"Kylie is a star that has become iconic outside of just singing," Australian fashion expert Paula Joye told AFP of the country's highest-selling artist of all time. "She's become part of the fabric of Australian culture."

Kylie was just 11 when she appeared in the television series "Skyways", but is best known for her star turn as Charlene in long-running soap opera "Neighbours" from 1986 to 1988.

She and her co-star Jason Donovan won popularity as an on-screen couple and were secretly a real-life item at the same time, although their romance did not last.

Her first single -- a cover of 1960s Little Eva hit "Locomotion" -- reached number one in Australia in 1987 and became a global hit, launching the girl-next-door's new career as a pop star and, later, dance diva.

She teamed up with Donovan for 1988 duet "Especially For You", which sold more than a million copies in Britain alone and topped the charts across Europe and Australasia.

While Jason's career since then has seen him star in musicals and speak frankly about his struggles with drug addiction, Kylie went on to record top-selling singles such as "Better the Devil You Know", "Spinning Around" and "All The Lovers" -- performing them around the world in glitzy showgirl outfits.

"On stage, she always looks like a giant sequin," said Australian fan Troy Lester, who pursued a career in costume design and fashion after falling in love with Kylie's costumes.

"It's incredible that you can be this little ball of energy and sparkle so much... She's a little pocket rocket that just keeps going and it's great to have that kind of positivity in your life."

"She's dazzling, an all-rounder entertainer. In a previous time, she would have been a dancing girl probably going around Australia in the gold rush age (of the 1850s) entertaining the miners," Valentish said.

The pop princess has long had a big LGBTI following and has often graced Sydney's annual Gay and Lesbian Mardi Gras parade.

In 2016, Kylie and her then-fiance British actor Joshua Sasse wore "Say 'I Do' Down Under" t-shirts in support of same-sex marriage at Australia's top music awards.

Fan Owen Lambourn, who goes by the moniker Owen Minogue on Twitter, recalled how her career kicked off during the AIDS epidemic of the 1980s.

"A lot of high-profile people steered clear of the community because there was that stigma that you were endorsing death, but she looked at everybody as being human," Lambourn told AFP.

"She's a great icon and an ambassador for universal love."

The singer was also outspoken about her battle with breast cancer in 2005, which forced her to cancel her headline slot at Britain's Glastonbury Festival.

She was given the all-clear a year later and has helped to raise awareness of the need for women to undergo screening for the disease, even in their 30s.

Aside from these campaigns, Minogue has kept much of her personal life under wraps, although her numerous boyfriends -- including late INXS rocker Michael Hutchence and French actor Olivier Martinez -- have been tabloid fodder over the decades.

She's showing no signs of slowing down and released new album "Golden" -- her 14th -- this year, making number one in both Australia and Britain.

"I am very aware and thankful that this is a good time in my life," she recently told the Sydney Morning Herald.

"I know I have worked for it and I have paid for it and so I am enjoying it, between my schedules and trying to take care of myself as well."