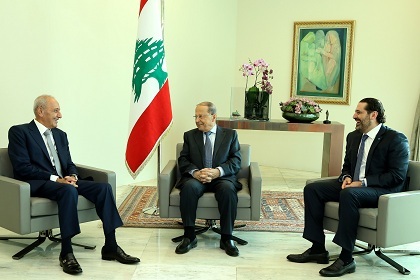 The outcome of ongoing negotiations conducted between Lebanon and Israel through the United Nations was presented in order to address 13 disputed border points of the "Blue Line", al-Joumhouria daily said.

Lebanon says Israel is constructing a cement separation wall on its southern border between Lebanon and occupied Palestine and building it in 13 disputed points, pending the final demarcation of the borders by the United Nations.

Consecutive meeting are held at the headquarters of the UNIFIL forces in Naqoura between the Lebanese and Israeli military delegations to that end.

Hariri clarified after the meeting “the Lebanese delegation is doing serious work through the UN, and Major General Ibrahim is also working on this,” he said, hoping talks will record a progress on this issue.

Al-Joumhouria daily said the meeting was not planned in advance, but was “hastily” decided by the President to “unify Lebanon’s position in light of the latest developments and the appointment of the new US envoy, David Schinger, to manage the negotiations on the disputed borders with Israel and Cyprus, replacing David Satterfield, who was retired.”

Aoun’s invitation came ahead of the forthcoming meeting of the Lebanese-Israeli tripartite committee in the presence of the international forces in the south next week, devoted to discuss the land borders and the fate of the cement separation wall being built by Israel.

Its as if they can do something about it?! lol. So the boys got together for some coffee and Arghili afternoon will be served with mashawi and discussion about potential lining of pockets for some potential citizenship for Colombian businessmen who add value to Lebanons future no doubt....

...and what about the eastern border then, we want clarification on the Golan/Chebaa Farms-issue. I suppose thats not convenient for you guys...

I'm quite sure that if instead of sitting and talking amongst themselves, and act will have no results whatsoever, they sat down and talked with Israel, things would go much quicker and much more effectively.