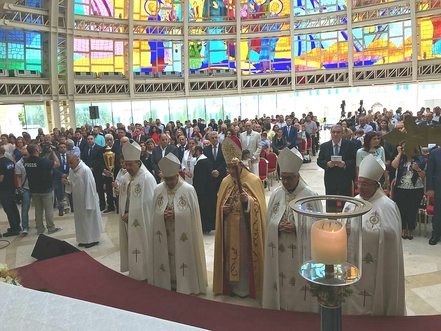 “We raise the Lebanese peoples’ righteous cry and just demands for economic development and securing the basic rights of housing, education, health care and food,” said al-Rahi during a sermon marking Father's Day.

“We call upon officials to stop destructive political bickering and to maintain national unity,” he added.

Rahi’s comments came in light of disagreements between political parties over Cabinet portfolios.

According to reports, a new government would be formed by PM-designate Saad Hariri following Eid al-Fitr.

He’s political and politicized, he’s only adding oil where water is needed.

Bravo Rahi he blesses all, mostly the president....

Rahi's term as Patriarch comes to an end in November,and he is reportedly considering running for another term. An unknown, Jesus of Nazareth, is reportedly considering entering the race. Jesus has condemned Rahi's support for the "racist" constitution of Lebanon, which reserves half of its parliatmentary seats for use by the estimated quarter of the population who are accounted as Christians. Jesus's press officer, John Bapst, told reporters, "How do you know someone is a Christian? There are two commandements only: love God and love your neighbor. The rest is administrative detail: a STOP sign here, a STOP sign there."