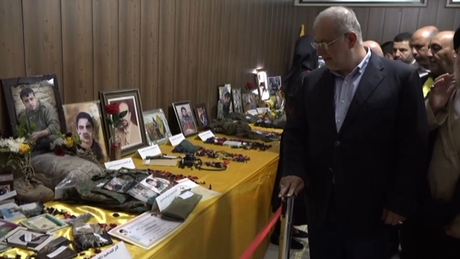 Hizbullah MP Mohammed Raad on Monday said the “party was now in a better position than before, following the parliamentary elections,” the National News Agency said.

"After the elections our situation is at its best compared to the past. Things have become better. We are not pressured, neither regarding a permanent majority at the Parliament, nor about forces that can impose any decision on the country without consulting us," the head of the Loyalty to the Resistance parliamentary bloc said during a memorial ceremony in the southern Bint Jbeil town of Kherbet Selm.

"Our security situation is also at its best; and our political condition is promising in terms of real action," he added.

You lost in Lebanon, you lost in Syria, you lost in Iraq, you can barely fight back against the Ansarullah in Yemen despite of massive American and European support.

Mastica... we know your rhetorics.... whatever happens... you end up with a "Divine Victory"...

Israel only seems to be successful against unarmed Palestinians at a border fence.
In a man to man combat they are are just Gucci soldiers in the IDF, they are not battle hardened.

and bring the other apes with you

and don't talk about massive support chump when Hezbollah's only raison d'être is Iranian money. Without it Nasrallah wouldn't be able to afford the ¢0.75 flip flops he so treasures and you'd be worshiping Berri like you did before the Ayatollahs invented the Nasrallahs.

"It is the peculiar quality of a fool to perceive the faults of others and to forget his own." - Cicero

Were those two dead iranian shia terrorists in your avatar battle hardened enough?

Each days that passes by sees more Ebolas end up in Body Bags... they lost another 4 yesterday near Deraa... from what I hear... more than 5,000 thugs killed or wounded in combat since the beggining of the war ...skeletor is busy...

-and they died with happiness

And they died with our happiness too...