Israel Mum on US Claims it Hit Iraq Militia in Syria 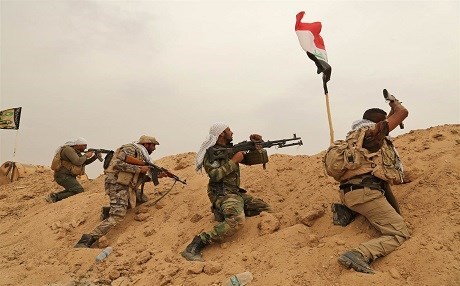 Israel declined to comment on Tuesday on a weekend air strike against an Iraqi paramilitary base in eastern Syria after its US ally implicated it in the attack.

The Sunday evening strike against the Al-Hari base on the Syrian side of the border with Iraq came less than 24 hours after Prime Minster Benjamin Netanyahu said Israel would strike Iran's "proxies" anywhere in Syria.

Fighters of Iraq's Hashed al-Shaabi paramilitary force, mainly composed of Iran-trained Shiite militia, have played a major role in the war against the Sunni extremists of the Islamic State group in Syria as well as Iraq.

But their presence has sparked confrontations with both Washington, which has been supporting a Kurdish-led alliance that controls other parts of eastern Syria, and Israel, which fears Iranian-inspired attacks on its forces in the occupied Golan Heights.

Syrian authorities and the Iraqi paramilitaries both blamed Washington for the strike, which killed at least 52 fighters, according to the Syrian Observatory for Human Rights.

But US officials denied any involvement and instead pointed the finger at Israel.

"We have reasons to believe that it was an Israeli strike," one US official told AFP on condition of anonymity.

The Israeli military declined to be drawn on the US claims. "We are not commenting on foreign reports," a spokeswoman said.

The military has carried out previous strikes against Iranian targets in Syria, but most have been significantly closer to Israel or the Israeli-occupied Golan.

Last month, Israel launched a large-scale attack on what it said were Iranian targets in Syria, raising fears of a major confrontation.

Those strikes followed a barrage of rockets that Israel said was fired towards its forces in the occupied Golan by Iran from Syria.

Even before that, Israel had been blamed for a series of recent strikes inside Syria that killed Iranians, though it has not acknowledged them.

Speaking at a cabinet meeting in Jerusalem on Sunday morning, Netanyahu reiterated his position that "Iran needs to withdraw from all of Syria".

"We will take action -– and are already taking action -– against efforts to establish a military presence by Iran and its proxies in Syria both close to the border and deep inside Syria," the prime minister said.

"We will act against these efforts anywhere in Syria."

Israeli seized a large swathe of the Golan Heights from Syria in the Six-Day War of 1967 and later annexed it in a move never recognised by the international community.

Iran has been a close ally of the Syrian regime for some four decades and, with Russia, has been a key supporter in the civil war that broke out in 2011.

Israel is under pressure for its massacres of civilians recently, so, as usual, it creates a new enemy for itself. Perhaps making Iraq its enemy will help Iraq pull itself together, Kurds and Arabs, Muslims of all sorts, all believers in justice.